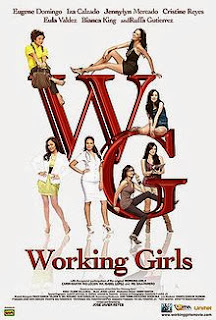 Working Girls is a 2010 Filipino comedy film remake starring Eugene Domingo, Jennylyn Mercado, Iza Calzado, Cristine Reyes, Bianca King, Eula Valdez and Ruffa Gutierrez. Directed by Jose Javier Reyes, from a screenplay by Amado Lacuesta, it was produced by GMA Films, Viva Films, and Unitel Pictures and released to cinemas on April 21, 2010 in the Philippines.
They are everyday women who all live in a world where men rule business and women rule the office. In this comedy hit of the summer, the story begins with Paula, (Eugene Domingo) the daughter-in-law of Nimfa (Gina Pareno). She is the queen of fake designer bags. She gets high earnings from her living and uses them to put her children through private school, something that her irresponsible and unemployed husband cannot provide. Then there is a single mom, Ada (Jennylyn Mercado), a young woman who is a call center agent by night and a student by day, working hard to provide for her young son. In the process, she neglects her son and puts additional strain on her relationship with her mother, Sabel (Rio Locsin). Ada is also close friends with Tobz (Carlo Aquino) who is currently having issues with his girlfriend, Wendy (Cristine Reyes) also a busy woman who does not give him time nor pleasure and whose long life goal is to become an actress. While pursuing this, she meets Rodney (Rafael Rosell), who is also an attorney to celebrity plastic surgeon, Dr. Cleo Carillo. One of her clients/friends, Marilou (Ruffa Guttierez), a beauty queen turned CEO upon the death of her husband, is also having problems with Amanda Dela Vega, her husband's daughter from another woman, and her own daughter, Dara Dela Vega (Bianca King). Dara is a Berkeley graduate who is eager to prove herself at her new job in a television show; she is struggling to manager her issues from home and her issues from her boss, Suzanne (Carmi Martin), Marilou's best friend. Another story follows Theresa (Iza Calzado), a nurse for Dr. Carillo's husband and who is content with her work but struggles to deal with her broken heart.
In the end, Paula, after a brief love affair with her temporary driver (Ricky Davao) decides to continue being a loud-mouthed and responsible wife. Ada finally decides to love Tabz while Wendy is left brokenhearted when Rodney leaves. Dara shows her wits and talent as she uncovers the truth about a protestor Dolorosa "Rose" Bonefacio (Maria Isabel Lopez), a women's rights activist. Marilou also finds some information on Amanda's schemes against the company. Lastly, there is Theresa, who finally forgives her ex-suitor and Emily.
Posted by Unknown
Labels: Movies, Pinoy Comedy, Tagalog Movie
Email ThisBlogThis!Share to TwitterShare to Facebook