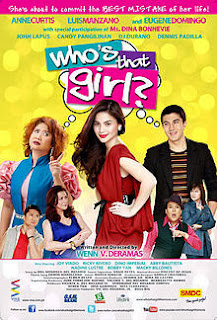 Who’s That Girl is a 2011 Filipino Comedy/Romance film starring Anne Curtis, Luis Manzano, and Eugene Domingo produced by Viva Films and SMDC and released by Star Cinema. Who’s That Girl is a story about how a case of mistaken identity can be life-altering, told in such hilarious manner. Anne Curtis plays Elizabeth Pedrosa, a wallflower who transforms into a gorgeous and successful career woman because of her longtime dream guy, John Eduque, played by Luis Manzano. A collaboration between Director Wenn V. Deramas and writer Ms. Mel Mendoza-Del Rosario, both award-winners.
When the school wallflower gets a pep talk from the most popular campus heartthrob at her lowest moment, this becomes a life-changing moment for her.
Elizabeth (Anne Curtis) transforms into a beautiful, intelligent and successful career woman, who has often fantasized about how her dream man John Eduque (Luis Manzano) had turned out to be. Until one day, she reads his name in the obituary. Elizabeth is shattered with grief over a man she was not even romantically involved with. She goes to the wake in hysterics causing eyebrows to raise, especially the deceased’s widow. The John Eduque who died is actually the senior John Eduque, John’s father. Realizing her fumble, Elizabeth hurriedly leaves, unaware of the damage she has caused to John’s family who suspects she is the unknown mistress. Mrs. Eduque succumbs to depression therefore John takes it upon himself to avenge his mother’s misery and hunts for the mystery woman. But instead of seeking revenge on Elizabeth, John starts to fall for her the more he gets to know her.