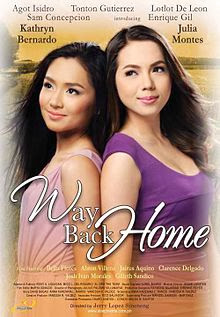 Way Back Home is a 2011 Filipino family drama film. The film was released by Star Cinema and premiered on August 17, 2011.
The film follows the story of two sisters, Ana Bartolome (Kathryn Bernardo) and Jessica Santiago (Julia Montes), who have been separated for twelve years and grew up in two totally different worlds.