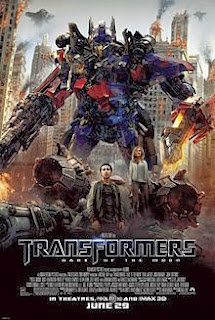 Transformers: Dark of the Moon is a 2011 American science fiction action film based on the Transformers toy line. First released on June 23, 2011, it is the third installment of the live-action Transformers film series. The movie is also the first in the franchise not to be distributed by DreamWorks, leaving the series to be owned by Paramount Pictures. Like its predecessors, Transformers and Transformers: Revenge of the Fallen, Transformers: Dark of the Moon is directed by Michael Bay and executive produced by Steven Spielberg. The film's story is set three years after the events of the second film, with the Autobots, during their collaboration with the NEST (Networked Elements: Supporters and Transformers) military force, discovering a hidden alien technology in possession of humans, which had been found by Apollo 11 on the Moon 42 years earlier. However, the Decepticons unveil a plan to use the technology to enslave humanity in order to bring back Cybertron, the home planet of the Transformers.
Autobots Bumblebee, Ratchet, Ironhide, Mirage (aka Dino), Wheeljack (aka Que) and Sideswipe led by Optimus Prime, are back in action taking on the evil Decepticons, who are eager to avenge their recent defeat. The Autobots and Decepticons become involved in a perilous space race between the United States and Russia, to reach a hidden Cybertronian spacecraft on the moon and learn its secrets, and once again Sam Witwicky has to come to the aid of his robot friends. The new villain Shockwave is on the scene while the Autobots and Decepticons continue to battle it out on Earth.