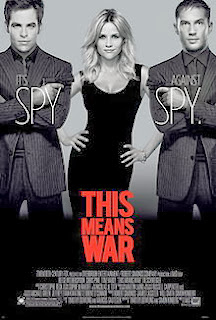 This Means War is a 2012 romantic comedy spy film directed by McG. The film stars Reese Witherspoon, Chris Pine, and Tom Hardy as victims of a love triangle in which two CIA agents who are best friends discover that they are dating the same woman.
Two CIA agents, Tuck and Frank who are also best friends, have been benched because someone's after them. Tuck is divorced with a son whom he's not close to and Frank is a ladies man. Tuck decides to try and find someone so he places his profile on a dating website. Lauren, a woman also looking for a guy sees tuck's profile and goes with him. She later bumps into Frank and he hits on her and she goes out with him. she's intrigued by both of them. When they learn that they're dating the same girl, they agree to let her choose. But both can't help but use their skills to keep tabs on her and each other. And also sabotage each others dates with her.