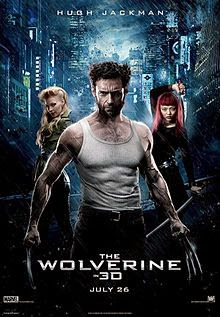 The Wolverine is a 2013 American–Australian superhero film featuring the Marvel Comics character Wolverine. It is the sixth installment in the X-Men film series and the second film headlining Wolverine after X-Men Origins: Wolverine in 2009. Hugh Jackman reprises his role from previous films as the title character, with James Mangold directing a screenplay written by Scott Frank and Mark Bomback, with uncredited parts by Christopher McQuarrie, based on the 1982 limited series Wolverine by Chris Claremont and Frank Miller. In the film, which follows the events of X-Men: The Last Stand, Logan travels to Japan, where he engages an old acquaintance in a struggle that has lasting consequences.
In modern day Japan, Wolverine is out of his depth in an unknown world as he faces his ultimate nemesis in a life-or-death battle that will leave him forever changed. Vulnerable for the first time and pushed to his physical and emotional limits, he confronts not only lethal samurai steel but also his inner struggle against his own immortality, emerging more powerful than we have ever seen him before.
Posted by Unknown
Labels: Action, Fantasy, Hollywood Movie, Movies, Sci-fi
Email ThisBlogThis!Share to TwitterShare to Facebook