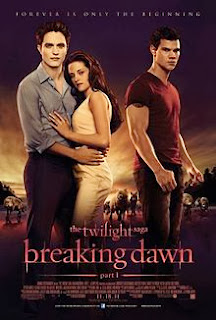 The Twilight Saga: Breaking Dawn – Part 1 (commonly referred to as Breaking Dawn – Part 1) is a 2011 American romantic fantasy film directed by Bill Condon and based on the novel Breaking Dawn by Stephenie Meyer. The first part of a two-part film forms the fourth installment in The Twilight Saga series. All three main cast members, Kristen Stewart, Robert Pattinson, and Taylor Lautner, reprised their roles.
Bella and Edward are to marry. Jacob becomes upset when he learns that Bella is planning to consummate the marriage on her honeymoon. The wedding over, Bella and Edward spend their honeymoon on the Cullen's idyllic private island. But, to their dismay, they discover that Bella is pregnant. The fetus is growing at an accelerated rate and everyone fears for Bella's safety. Will she go ahead with her pregnancy, whatever the cost? The Quileutes close in as the unborn child poses a threat to the Wolf Pack and the towns people of Forks.