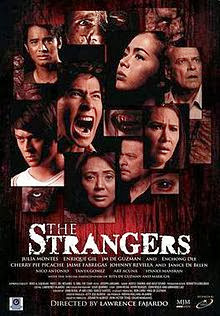 The Strangers is a 2012 Filipino teen horror film directed by Lawrence Fajardo. It stars Enchong Dee, Julia Montes, Enrique Gil and JM De Guzman. The film is produced by Quantum Films and MJM Productions and distributed by Star Cinema on December 25, 2012. It is also one of the official entries of the 38th Metro Manila Film Festival.
The story of this MMFF entry revolves around a family who get lost in a province and start being hunted by “the strangers” or the aswangs.