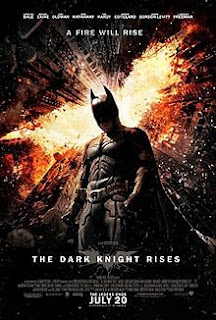 The Dark Knight Rises is a 2012 British-American superhero film directed by Christopher Nolan, who co-wrote the screenplay with his brother Jonathan Nolan and the story with David S. Goyer. Featuring the DC Comics character Batman, the film is the final installment in Nolan's Batman film trilogy, and it is the sequel to Batman Begins (2005) and The Dark Knight (2008). Christian Bale reprises the lead role of Bruce Wayne/Batman, with a returning cast of his allies: Michael Caine as Alfred Pennyworth, Gary Oldman as James Gordon, and Morgan Freeman as Lucius Fox. The film introduces Selina Kyle (Anne Hathaway), a sly, morally ambiguous cat burglar, and Bane (Tom Hardy), a mercenary bent on destroying Gotham City. Drawn back into action by new threats facing the city, an older Bruce Wayne is forced to come out of retirement and become Batman once again.
Despite his tarnished reputation after the events of The Dark Knight, in which he took the rap for Dent's crimes, Batman feels compelled to intervene to assist the city and its police force which is struggling to cope with Bane's plans to destroy the city.
Posted by Unknown
Labels: Action, Hollywood Movie, Movies, Sci-fi
Email ThisBlogThis!Share to TwitterShare to Facebook