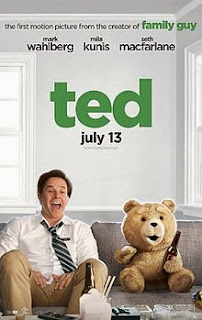 Ted (stylized as ted) is a 2012 American comedy film directed, co-produced and co-written by Seth MacFarlane, with MacFarlane, Mark Wahlberg and Mila Kunis in leading roles. The supporting cast includes Joel McHale and Giovanni Ribisi.
John makes a Christmas miracle happen by bringing his one and only friend to life, his teddy bear. The two grow up together and John must then choose to stay with his girlfriend or keep his friendship with his crude and extremely inappropriate teddy bear, Ted.