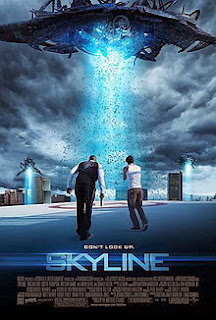 Jarrod and his girlfriend Elaine have flown to Los Angeles for Jarrod's best friend Terry's birthday party. They celebrate with Terry's girlfriend, Candice, and his assistant, Denise. During the party, one of Terry's employees, Ray, welcomes Jarrod to L.A., thinking he has moved there to join Terry's special effects company. During a private argument about whether or not they should move, Elaine reveals she is pregnant.
The next morning, blue lights descend from the sky, mesmerizing anyone who looks at them. The light affects them physically, causing them to become zombie-like. Any immobilized humans are collected by the machines. Ray is taken, but Jarrod is saved when Terry tackles him, and he slowly returns to normal. He and Terry go to the apartment roof to investigate the lights. They see alien ships descending through the clouds and vacuuming up thousands of screaming people.
Back in the apartment, Jarrod believes the open water would be a safer place, since there are no machines over the sea. They attempt to reach the marina by car, splitting into two cars: Terry and Denise in the first, followed by everyone else in the other. They encounter a couple, Colin and Jen, also getting ready to flee the building. As Terry's car exits the garage it is flattened by a massive alien. Denise is killed but Terry escapes. As he begins to run he is abducted. The others run back into the garage, where they encounter another lifeform that takes Colin. It corners the rest of the group before the building's concierge, Oliver, slams into it with an SUV. They find Colin is still alive inside the creature. As they try to free him, the machine comes to life, sucking out Colin's brain and regaining its energy. As they run back into the building, Jen is abducted.
The next day, the United States Air Force launches an attack using stealth unmanned combat aerial vehicles and conventional drone aircraft armed with missiles. Only one stealth plane gets through and just before it gets destroyed it fires a nuclear missile, hitting the mothership. The detonation blows the ship apart, but as the mushroom cloud clears, the ship rises back into the air and begins to slowly repair itself. After Jarrod tells Elaine that the alien light made him feel powerful, he is adamant that safety must be found outside. Oliver wants to stay inside and tries restraining him. Jarrod physically starts changing as he lifts Oliver off the floor and vows that he will protect his family.
Helicopters arrive, inserting squads of soldiers. Jarrod and Elaine go to the roof hoping to catch a ride to safety. Oliver and Candice stay in the penthouse, but are found. Candice is caught by the blue light and is absorbed; Oliver attempts to kill a tanker alien by turning on a gas stove and igniting a lighter, causing the room to explode. The soldiers are thrown off the roof by the aliens and a squid alien attacks Jarrod and Elaine. They kill it, but with Jarrod badly hurt. They are surrounded by the aliens, so resigned to their fate, they look into the blue light, embrace and are sucked up into the mother ship as it slowly flies over the building.
A brief montage shows that cities all over the world have been overrun by the aliens.
Inside the alien spacecraft, Elaine wakes up on a pile of human corpses. Tubes are sucking human brains into machines; probes go through the pile looking for what they can find. Elaine sees Jarrod in the pile but has to watch helplessly as his brain is removed. She is probed, but left alone since she is pregnant. Elaine is transported to another chamber where other pregnant women have been sent. Meanwhile, Jarrod's brain, glowing red instead of the usual aliens' blue, is inserted into a new alien body.
Animating the alien body, Jarrod seems to retain control, and comes to the aid of Elaine and their unborn child. A series of still images depict "Jarrod" protecting Elaine and their child from the other aliens. The film ends on a cliffhanger with "Jarrod" being surrounded by aliens.