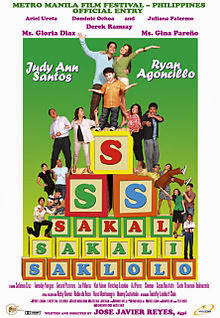 Sakal, Sakali, Saklolo (Choked, Maybe, Help Me!), a romantic comedy movie released by Star Cinema, is an official entry to the 33rd Metro Manila Film Festival - Philippines. This is the sequel of the 2006 film Kasal, Kasali, Kasalo with Judy Ann Santos and Ryan Agoncillo reprising their roles. There were some scenes filmed in Spain. Santos and Agoncillo were in attendance during the California and Hawaii international premieres.
Angie (Judy Ann Santos) and Jed (Ryan Agoncillo) are first-time parents who experience the joys and pains of raising a child. They realize that parenthood is extremely demanding and learn to sacrifice their own interests for their baby.Four years later Jed realises that he and Angie still have not been on a honeymoon he decides to take Angie to Barcelona, At first Angie protests against the honeymoon but decides to go and leaves their child with their friends Kaye and Dodie. When their mothers (Gloria Diaz and Gina Pareño) hear of the couple's departure, the grandmothers each take turns caring of the child.
After Jed and Angie return from their trip, the duo must deal with their mothers' personal issues. They realize that only after they've fulfilled their roles as children can they understand the true meaning of what it is to be a parent
Posted by Unknown
Labels: Movies, Pinoy Comedy, Pinoy Romance, Tagalog Movie
Email ThisBlogThis!Share to TwitterShare to Facebook