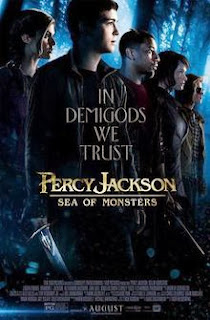 Percy Jackson: Sea of Monsters is a 2013 American fantasy-adventure film based on the Rick Riordan novel of the same name. It is a sequel to the 2010 film Percy Jackson & the Olympians: The Lightning Thief and is the second installment in the Percy Jackson film series. It continues the adventures of Percy Jackson (Logan Lerman) and his friends, as they search for the Golden Fleece at the eponymous Sea of Monsters (better known to the humans as the Bermuda Triangle) in order to save an ailing magical tree that protects their home from foes. In the film, Percy is filled with self-doubt and doubts himself just to be a "one-quest wonder". The film was produced by Karen Rosenfelt, Mark Radcliffe and Chris Columbus (who served as the director for the first film) under Fox 2000 and directed by Thor Freudenthal. Originally planned for a release in March 2013, the film was pushed to August 16 but was eventually released on August 7 of the same year. and was converted to 3D in post-production. The film was released to mixed reviews from critics upon release with praise for the performances of the young leads as well as Nathan Fillion's performance as Hermes, but received criticisms for its plot and characterization. It was made on a budget of $90 million. The film, expanded to over just 30 territories outside of North America. It has, as of November 11, 2013, made more than twice its budget, raking in almost $200 million at the worldwide box office.
Please install the Flash Plugin