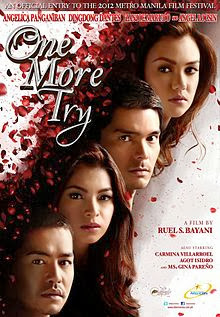 One More Try is a 2012 Filipino romantic drama film starring Angelica Panganiban, Dingdong Dantes, Zanjoe Marudo and Angel Locsin. The film was one of the eight official entries to the 2012 Metro Manila Film Festival. The film was produced by Star Cinema and released December 25, 2012.
Grace (Angel Locsin) is a single mother willing to sacrifice everything to save her ill son, Botchok (Miguel Vergara). Grace lives a good life with her son and supportive boyfriend, Tristan (Zanjoe Marudo). When Botchok’s rare blood disease became severe, Grace was forced to reconnect with Botchok’s biological father, Edward (Dingdong Dantes). Edward, an accomplished man married to an equally successful Jacqueline (Angelica Panganiban), is uncomfortable with reconnecting with Grace. Having no children of their own, Jacqueline gives her blessings for Edward to reconnect with Grace to help save their son. The reconnection with Grace and Botchok starts to taint Edward and Jacqueline's marriage. What becomes of relationships when a tangled web is woven? See the movie and find out.
Posted by Unknown
Labels: Movies, Pinoy Drama, Pinoy Romance, Tagalog Movie
Email ThisBlogThis!Share to TwitterShare to Facebook