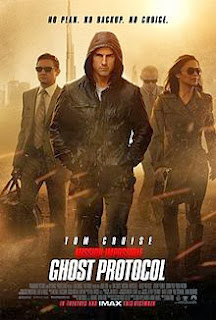 Mission: Impossible – Ghost Protocol (also known as Mission: Impossible IV) is a 2011 American action film. It is the fourth film in the Mission: Impossible series. It stars Tom Cruise, who reprises his role of IMF Agent Ethan Hunt, and is director Brad Bird's first live-action film. Ghost Protocol was written by André Nemec and Josh Appelbaum, and produced by Cruise, J. J. Abrams (the third film's director) and Bryan Burk. It saw the return of the first film's editor, Paul Hirsch, and is also the first Mission: Impossible film to be partially filmed using IMAX cameras. The film was released in North America by Paramount Pictures on December 16, 2011.
In the fourth installment of the Mission Impossible series, Ethan Hunt and a new team race against time to track down Hendricks, a dangerous terrorist who has gained access to Russian nuclear launch codes and is planning a strike on the United States. An attempt by the team to stop him at the Kremlin ends in a disaster, with an explosion causing severe damage to the Kremlin and the IMF being implicated in the bombing, forcing the President to invoke Ghost Protocol, under which the IMF is disavowed, and will be offered no help or backup in any form. Undaunted, Ethan and his team chase Hendricks to Dubai, and from there to Mumbai, but several spectacular action sequences later, they might still be too late to stop a disaster.