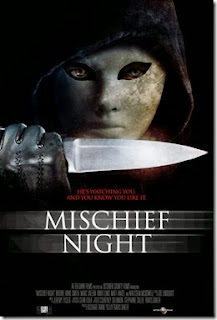 While October 31st is known for tricks, treats, and dressing up in revealing costumes, the night before is when children and teens around the country are given free reign to play pranks, such as egging and toilet papering houses, smashing Jack O’Lanterns, setting fires, and just generally being giant assholes. It’s basically an excuse for teens to revel in wickedness while excusing it due to a geographically sporadic tradition. Such is the premise of Richard Schenkman’s Mischief Night, except replace “teens playing pranks” with “mask-wearing murderer.”
The film follows Emily Walton, a young girl suffering from psychosomatic blindness following the death of her mother in a car accident nine years prior. It’s the night before Halloween and her dad, pressured by Emily to get back in the dating scene, departs for the evening on a date, leaving her home alone. Her peaceful night at home is quickly interrupted by a man wearing a mask and donning a yellow rain slicker, who slowly stalks and taunts her as she must rely on her other senses to survive Mischief Night.