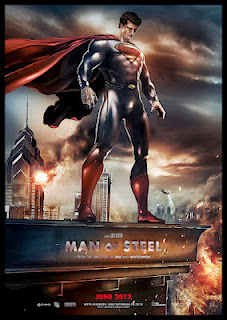 Man of Steel is a 2013 American superhero film directed by Zack Snyder, produced by Christopher Nolan, and written by David S. Goyer. Based on the DC Comics character Superman, the film is a reboot of the Superman film series that portrays the character's origin story. The film stars Henry Cavill in the title role, with Amy Adams as Lois Lane, Michael Shannon as General Zod, Diane Lane as Martha Kent, Kevin Costner as Jonathan Kent, Laurence Fishburne as Perry White, and Russell Crowe as Jor-El. Man of Steel sets the tone for a shared fictional universe of DC Comics characters on film.
A young boy learns that he has extraordinary powers and is not of this Earth. As a young man, he journeys to discover where he came from and what he was sent here to do. But the hero in him must emerge if he is to save the world from annihilation and become the symbol of hope for all mankind.