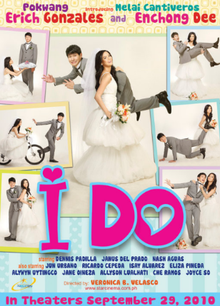 I Do is a 2010 Filipino romantic comedy film produced and released by Star Cinema. The film was released in the Philippines on September 29, 2010.
Mayumi (Erich Gonzales) is a girl with a happy disposition in life who dreams of meeting her "the one" someday. She has been dreaming of meeting her "the one" and having the perfect wedding ever since she was a little girl. When she meets Lance (Enchong Dee), a Chinese descendant, in a wedding, she immediately knows that he is "the one" she is waiting for, her faith and destiny. The two of them become lovers despite the unwillingness of their families to their relationship.
The unsupportiveness of Lance's family was shown during a birthday party, where Mayumi wore a blue dress while everyone else in the party wore red. (During celebrations, it is customary for the Chinese to wear red attires.) Lance's family talked about how she was very different in front of her in Chinese. They also tell Lance about how inappropriate his companion is.
One day, Mayumi tells her friends about her current condition, about how she recently seems to be very choosy of what to eat and also how she always feels like urinating. Her friends immediately accompany her to the drugstore, thinking of the possibility that she might be pregnant. Turns out, Mayumi is pregnant. Her family, especially her father, is very disappointed of her and tells her to move out. Mayumi temporarily lives in Lance's house. She is forced to marry Lance. Although Mayumi loves the idea of becoming Lance's bride, Lance on the other hand has doubts on Mayumi becoming his wife. He doesn't have enough money for the extravagant wedding that Mayumi wants, since his family is not very supportive on the idea of him marrying a Filipino and also because the baby is not a boy. Being a Chinese, Lance is obliged to marry also a girl of Chinese descent to keep the Chinese blood tradition. Mayumi's family on the other hand felt they were betrayed because Lance promised to marry Mayumi because of their love child. Is marrying someone because of a baby worthy of saying "I do"?