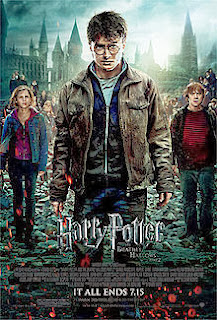 Harry Potter and the Deathly Hallows – Part 2 is a 2011 fantasy film directed by David Yates and distributed by Warner Bros. Pictures. It is the second of two cinematic parts based on the novel by J. K. Rowling. The film, which is the eighth and final instalment in the Harry Potter film series, was written by Steve Kloves and produced by David Heyman, David Barron, and Rowling. The story continues to follow Harry Potter's quest to find and destroy Lord Voldemort's Horcruxes. The film stars Daniel Radcliffe as Harry Potter, alongside Rupert Grint and Emma Watson as Harry's best friends, Ron Weasley and Hermione Granger. Principal photography began on 19 February 2009, and was completed on 12 June 2010, with reshoots taking place in December 2010, marking the series' closure of ten years of filming. Part 2 was released in 2D, 3-D and IMAX cinemas worldwide from 13–15 July 2011, and is the only Harry Potter film to be released in 3-D.
The final chapter begins as Harry, Ron, and Hermione continue their quest of finding and destroying the Dark Lord's three remaining Horcruxes, the magical items responsible for his immortality. But as the mystical Deathly Hallows are uncovered, and Voldemort finds out about their mission, the biggest battle begins and life as they know it will never be the same again.