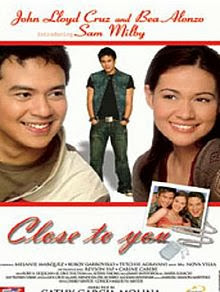 Close To You is a Filipino film starring John Lloyd Cruz, Bea Alonzo, and Sam Milby. The movie was released on February 15, 2006 under Star Cinema, directed by Cathy Garcia-Molina. The year 2006 ended with 5 Star Cinema films grossing more than ₱100 million including Close To You.
Manuel and Marian have been best friends since they were kids. They are so close that they know each other's secrets...well, almost. For the last 16 years, Manuel never had the courage to tell Marian how much he loves her.
On the other hand, Marian sees Manuel as no more than her best friend. Marian's greatest love has alwaysbeen Lance (Sam), a classmate who protected her from bullies back in grade school. Ever since Lance and his family migrated abroad ten years ago, Marian never had the chance to establish contact with him again. The only thing that Marian knows is that Lance has become the lead singer of the new rock band, Orion.
Good fortune smiles on Marian when Orion decides to tour the Philippines. Marian is intent on seeing Lance again, and she brings Manuel with her on a chase that brings them around the Philippines and abroad. Manuel believes that the whole chase is futile because a popular star like Lance will not remember a simple girl like Marian, but Marian does not believe him.
When Lance and Marian finally meet again, sparks fly between them. Manuel now has to decide - Will he let his best friend be happy with her Prince Charming, or will he fight for the love that has kept him alive for the last 16 years?