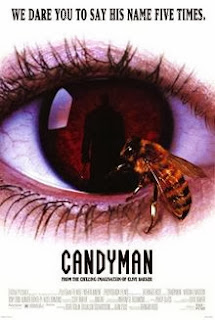 Helen Lyle is a graduate student conducting research for her thesis on urban legends. While interviewing freshmen about their superstitions, she hears about a local legend known as Candyman. The legend contains many elements similar to the most well-known urban legends, including endangered babysitters, spirits who appear in mirrors when fatally summoned, and maniac killers with unnatural deformities. The legend claims that Candyman can be summoned by saying his name five times while facing a mirror (similar to the Bloody Mary folkloric tale), whereupon he will murder the summoner with his hook-hand. Later that evening, Helen and her friend Bernadette jokingly call Candyman's name into the mirror in Helen's bathroom but nothing happens.
Helen discovers that Candyman was the son of a slave, whose father became prosperous after developing a system for mass-producing shoes during the Civil War. Candyman grew up in polite society and became a well-known artist, sought after for his talent in producing portraits. After falling in love with a white woman whom he impregnated, he was set upon by a lynch mob hired by his girlfriend's father, who cut off his painting hand and replaced it with a hook. He was smeared with honey stolen from an apiary, prompting the locals to chant 'Candyman', and the bees stung him to death.
With her colleague Bernadette, Helen enters the notorious gang-ridden Cabrini–Green housing project, the site of a recent unsolved murder, linked to Candyman. There, she meets Anne-Marie McCoy, one of the residents, and a young boy named Jake, who tells her the disturbing story of a child who was castrated in a public restroom, supposedly by Candyman. While Helen explores the run-down restroom, a gang member attacks her: he carries a hook, and has taken the Candyman moniker as his own to enhance his "street cred". Helen survives the assault and is able to identify her attacker to the police.
Helen later faces the apparent real Candyman, who explains that since Helen has been telling people he is just a legend, he must prove he exists. Helen blacks out and wakes up in Anne-Marie's apartment, covered in blood. Anne-Marie, whose Rottweiler has been decapitated, and whose baby is also missing, attacks Helen and she is forced to defend herself, using a meat cleaver. The police then arrest Helen. Trevor, Helen's husband, bails her out of jail, but Candyman appears to Helen again and cuts her neck, causing her to bleed unconscious. Bernadette then arrives at the apartment and Candyman murders her. The police are called and Helen is sedated and is placed in a psychiatric hospital pending trial.
After a month's stay at the hospital, Helen is interviewed by a psychologist in preparation for her upcoming trial. While restrained, Helen attempts to convince the psychologist that the urban legend is indeed true by calling Candyman. Candyman appears, murdering the psychologist, and Helen is able to escape. She briefly confronts Trevor but he is now living with one of his female students. Helen then flees to Cabrini–Green to confront Candyman and to locate Anne-Marie's still-missing infant. In an apartment's attic, she encounters the words "It was always you, Helen."
Candyman predicts that Helen will help carry on his tradition of inciting fear into a community, and promises to release the baby if Helen agrees to sacrifice herself. However, Candyman, intending to sacrifice them to feed his own legend, takes both the baby and Helen into the middle of a massive junk pile, which the residents have been planning to turn into a bonfire. The residents believe Candyman is hiding inside the pile and set it aflame. Helen rescues the baby, but dies from burns in the process. Candyman also burns in the fire, leaving only his hook-hand behind.
After Helen's funeral, in which the residents of Cabrini–Green pay their respects, Trevor stands before a mirror in the bathroom of their former apartment. He chants Helen's name in grief, summoning her vengeful spirit. Helen kills Trevor with Candyman's hook, leaving Trevor's new lover Stacey with his bloodied corpse as Helen becomes the embodiment of the urban legend.
The film ends as the credits roll over a painting of Helen with her hair ablaze on a wall in Cabrini-Green, showing that she has now entered folklore.