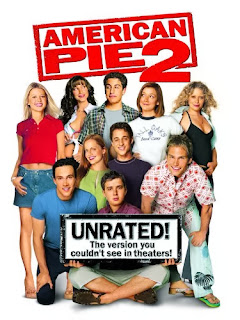 American Pie 2 is a 2001 teen comedy film and sequel to American Pie and is the second film in the American Pie theatrical series. It was written by Adam Herz and David H. Steinberg, and directed by J. B. Rogers. The film picks up the story of the five friends from the first film as they reunite during the summer after their first year of college. It holds true to the idea of piling on risqué scenes one after another. It was released in the United States on August 10, 2001, and grossed over $145 million in the US and $142 million overseas on a budget of $30 million. It was followed by sequels American Wedding (2003) and American Reunion (2012).
The film tells the story of the five friends - Jim, Chris ("Oz"), Kevin, Paul ("Finch"), and Steven ("Stifler") - and their attempts to have the greatest summer party ever, as well as their antics in between. In addition to this, Jim bonds with his prom date Michelle, who is helping him improve his libido and sex appeal for the return of Jim's love interest, Nadia. Much of the film takes place at a summer beach house in Grand Harbor, Michigan, per Kevin's older brother's suggestion.