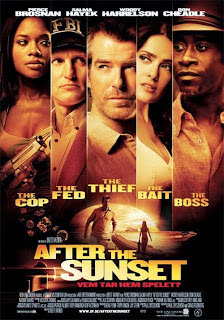 After the Sunset is a 2004 action comedy film starring Pierce Brosnan as Max Burdett, a master thief caught in a cat-and-mouse game with FBI agent Stan Lloyd played by Woody Harrelson. The film was directed by Brett Ratner and shot in the Bahamas.
The story of what happens after a master thief achieves his last big score, when the FBI agent who promised he'd capture him is about to do just that.