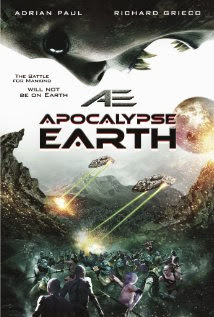 
Synopsis: The film opens on a scene of battle and retreat as spaceship 'arks' are loading civilians for transplant to other worlds. Lt. Frank Baum is one of the military officers in charge of overseeing the loading of the transports. Owing to a bombing run of the city by Earth's alien attackers and riots on the ground by scared people he and a few of his people get shoved into the ship along with the last of people boarding and are removed from Earth along with the regular evacuees. He reluctantly submits to cryo storage when he finds he can't get back to his post on Earth. When the ship finally descends planet-side it breaks up due to atmospheric pressures and crash lands. Many people die in the crash while others end up having to run for their lives after they are attacked on the ground by near-invisible humanoids they christen chameleons. Frank is able to assemble a small group of survivors including a small set of humans who also crash landed two years ago from the Alpha Centauri-bound ark. They find and are aided by a camouflage-skinned native female named Lea. While being chased by the Chameleons they learn of and pursue the goal of finding a left over space ship facing difficulties and fatalities during their journey. Most of the survivors choose to follow Frank in his pursuit of leaving the planet and returning to Earth but one wants to remain and plots to kill the Captain of the ship that brought them there. While they eventually find the ship and are able to scavenge parts from the ark to make it work, their numbers continue to decrease through attrition by native fauna and additional Chameleon attacks. When they finally reach space and are able to get their bearings, they find in a 'Planet of the Apes' twist that they are actually on Earth - 325,000 years after they left.
Posted by Unknown
Labels: Action, Hollywood Movie, Movies, Sci-fi
Email ThisBlogThis!Share to TwitterShare to Facebook