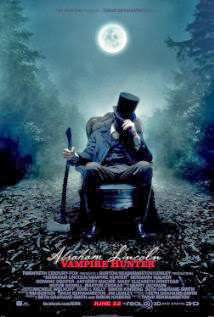 Abraham Lincoln: Vampire Hunter is a 2012 American action fantasy film directed by Timur Bekmambetov, based on the 2010 mashup novel of the same name. The novel's author, Seth Grahame-Smith, wrote the screenplay with Simon Kinberg. Benjamin Walker stars as the title character. The real-life figure Abraham Lincoln, the 16th President of the United States (1861–1865), is portrayed in the novel and the film as having a secret identity as a vampire hunter.
At the age of 9, Abraham Lincoln witnesses his mother being killed by a vampire, Jack Barts. Some 10 years later, he unsuccessfully tries to eliminate Barts but in the process makes the acquaintance of Henry Sturgess who teaches him how to fight and what is required to kill a vampire. The quid pro quo is that Abe will kill only those vampires that Henry directs him to. Abe relocates to Springfield where he gets a job as a store clerk while he studies the law and kills vampires by night. He also meets and eventually marries the pretty Mary Todd. Many years later as President of the United States, he comes to realize that vampires are fighting with the Confederate forces. As a result he mounts his own campaign to defeat them.