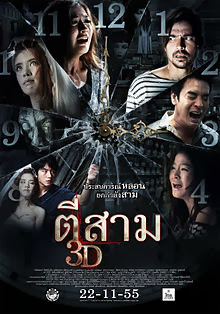 3AM (Thai: ตีสาม 3D) is 2012 Thai horror 3D short film. There are three stories. It was released on November 22, 2012 The film was directed by Patchanon Tummajira, Kirati Nakintanon and Isara Nadee. It is a horror story that happened at the third strike. Who knew that the dead were closer than we thought

Sisters May (Focus Jirakul) and Mint (Apinya Sakuljaroensuk) are left to run their family business, a wig shop, while their parents are on vacation in China. A customer offers to sell May some human hair of great quality, without knowledge that the hair was illegally salvaged from a female corpse, and that the salvager seemingly committed suicide. May works overtime weaving the new wig, but a female apparition haunts her, presumably the owner of the hair. Mint then returns with 3 friends to continue partying at home, and May is infuriated as one of the friends carelessly toys with a wig. After the sisters argue, Mint orders her friend to return the wig to its rightful place, but finds him decapitated in the stock room as he fails to return. The ghost now torments the remaining party of 4, then killing Mint's remaining 2 friends. The sisters then seek refuge in the kiln dry room, and the female ghost traps May inside the kiln dryer. Mint attempts to pry open the door in vain, and the machine overheats and explodes. The impact lunges Mint towards the wall, but May is nowhere to be seen. Awaken to the sound of her parent’s return, Mint tries to explain last night’s ordeal, but is disturbed by a distraught May, and the fact that everyone ignores her. Mint realizes that she has died from the explosion, being impaled by a glass shard, and that the ghost now inhabits May’s body.

Junior mortician Tod(Tony Rakkaen) is assigned to be stationed at the bridal home of Mike (Peter Knight) and Cherry (Karnklao “Grace” Duaysianklao), an engaged couple who died a week before their wedding. While performing rituals and maintenance, Tod opens Cherry’s coffin in an attempt to oust and intruding lizard, but is infatuated with Cherry’s beauty. After seeing a dream of Cherry crying for help and uncovering some clues suggesting Mike was jealous and abusive, Tod separates the couple and gets intimate with Cherry’s corpse, hoping to at least save Cherry from Mike even after death. As Tod sleeps with Cherry’s corpse one night, Tod goes into the hallway to check on some noise, only to be frightened by Mike’s ghost. After retreating back into the bedroom, Cherry drags Tod under the bed and stabs his ankle. A frightened Tod then bumps into Mike’s corpse, only to be struck by a revelation: Mike bounded Cherry not over jealousy, but to prevent her from committing suicide. After Mike unties Cherry out of guilt and sympathy, Cherry over powers Mike and breaks a glass figurine. Mike struggles to get the glass shard from Cherry's hand, only to have Cherry slash his jugular veins. Cherry then proceeds to slit her own throat and dies. Cherry then asks whether Tod no longer loves her in the same manner she did Mike. Revealing her now rotten face, she kisses Tod, causing him to faint out of fright. Tod awakens and panics as he is trapped inside a coffin, with Cherry sitting on top, claiming her new lover….

Executives Karan (Chakrit Yamnam) and Tee (Ray MacDonald) take pleasure in playing ghostly pranks on their employees on a daily basis. After scaring off Bump (Prachakorn Piyasakulkaew) and Ging (Kanyarin Nithinaparath) with a floating head, they proceed to spook a transsexual employee. Rejoicing their success in pulling off such pranks, Bump and Ging makes a failed attempt to spook them, and then claim that they returned to prepare documents for tomorrow’s meeting. After the four pull off one gruesome prank over another on each other, they decide to return home. However, while in the elevator, both Karan and Tee each receive a phone call, saying that Bump and Ging were found dead under the stairs. It turns out that Bump and Ging fell off the stairs and plummeted into the first floor after being frightened from Karan and Tee’s floating head prank. Realizing the two employees behind them are already dead, Karan reaches for the buttons to get off, but is hindered by Bump. The audience then sees the elevator descending endlessly into darkness….