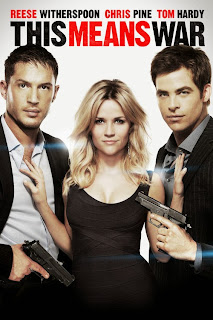 CIA agents and best friends Franklin "FDR" Foster (Chris Pine) and Tuck Hansen (Tom Hardy) are deployed to Hong Kong to prevent international criminal Karl Heinrich (Til Schweiger) from acquiring a weapon of mass destruction, but the mission goes awry, resulting in the death of Heinrich's brother, Jonas, and Heinrich swearing vengeance against them. Upon returning to America, their boss, Collins (Angela Bassett), assigns them to desk duty for their protection.
FDR is a womanizer, whose cover is a cruise ship captain, while Tuck, who presents himself as a travel agent, has an ex-wife, Katie (Abigail Spencer), and a young son, Joe (John Paul Ruttan). After seeing a commercial for online dating, Tuck decides to sign himself up and is paired with Lauren Scott (Reese Witherspoon), a product testing executive who is dealing with the recent engagement of her ex-boyfriend. Her best friend, Trish (Chelsea Handler), enrolled her in the same online dating website. FDR insists on being Tuck's backup for the date and hides nearby, but Tuck and Lauren hit it off.
Shortly thereafter, FDR runs into Lauren at a video store and tries to flirt with her, not knowing she's Tuck's date. She surmises that he's a ladies' man and ignores him. Intrigued, FDR crashes into one of Lauren's test groups and persuades her to go on a date with him. The date does not go well at the start, with Lauren storming out of the club FDR takes her to. After arguing in the street, FDR walks away from Lauren, but seconds later Lauren sees her ex-boyfriend and his fiancée approaching. Desperate, Lauren grabs FDR and kisses him, and lies to her ex that she and FDR are together, as FDR plays along with the ruse. Her ex and his fiancée both seem jealous at the passion displayed, and move along. FDR demands that Lauren explain what just happened, and suggests they grab some dinner at a nearby pizza parlor, where they talk seriously and hit it off. Later, Lauren feels guilty about dating two men at the same time, but is persuaded by Trish to make the best of the situation.
FDR and Tuck soon discover that they are seeing the same woman and decide not to tell her that they know each other, not to interfere with each other's dates, and not to have sex with her, letting her instead come to a decision between them. They soon break their rules and use CIA technology and assets to spy on her, discover her preferences, and sabotage each other's chances with her. FDR and Lauren eventually have sex. Tuck and Lauren nearly have sex but she decides against it, feeling bad about sleeping with both the men. However, since Tuck sabotages FDR's surveillance devices in her apartment, FDR is convinced that Tuck and Lauren did have sex.
Lauren and Trisha discuss the pros & cons of dating more than one guy, and Trish advises Lauren on how to pick 'the right one'.
Eventually, Lauren invites Tuck to lunch, while FDR discovers that Heinrich has arrived in town to exact his revenge. He interrupts Lauren's date to warn Tuck, but Tuck doesn't believe him. They engage in an extended fight, after which Lauren discovers that they are in fact best friends and, feeling made a fool of, leaves with Trish. At that moment, the women are kidnapped by Heinrich and his men, who are pursued by FDR and Tuck.
FDR and Tuck rescue Lauren and Trish after a car chase, in which they reveal that they are CIA agents. On Lauren's advice, they shoot out the headlights on Heinrich's SUV, deploying the airbags and sending the car rolling out of control towards them all. With Lauren standing directly in the path of the approaching SUV, FDR and Tuck, on different sides of the road, urge her to come to their side, and she is saved as she ultimately chooses FDR's side, while Heinrich dies when his car rolls off the elevated freeway and crashes below. Lauren has decided to be with FDR, and Tuck makes amends with him, as they declare their brotherly love for one another, and FDR says they're "family, and forever." Lauren and FDR kiss. Tuck soon reconciles with Katie and remarries her.
Shortly thereafter, FDR and Tuck go on a mission. They are about to parachute out of a Chinook helicopter when FDR reveals that he will marry Lauren, and asks Tuck to be his best man. He reveals that he had sex with Katie before she met Tuck, but no longer feels guilty about it because Tuck had sex with Lauren. Tuck, however, reveals that they did not go all the way and angrily tackles FDR out of the helicopter.
The DVD release has two very different alternate endings: either Lauren choosing neither; or Lauren choosing Tuck, and FDR hooking up with girls, Julie and Jessica.

Thanks for watching This Means War (2012 English Film) Full Movie