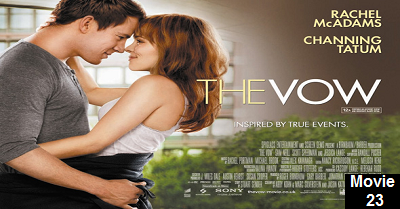 Paige Collins (Rachel McAdams) and her husband Leo (Channing Tatum) come out of a movie theater. On their way home, at a stop sign, Paige unbuckles her seatbelt to lean over and kiss Leo. At that very moment, a truck rams their car from behind and Paige crashes through the windshield. Both of them are rushed to the emergency room, and as Leo, in a voice-over talks about how "moments of impact help in finding who we are" the movie cuts to how Paige and Leo first met. The scenes of how they courted, proposed and married at the Art Institute of Chicago are interwoven with the present.
When Paige regains consciousness, she thinks Leo is her doctor, having lost all memories of the past few years. When her parents, Bill and Rita Thornton, learn about this and visit her, it is the first time that Leo meets them. Paige does not understand why he would not have met her parents, having been married, and finds it even stranger that he did not know why either, nor did she understand why she left law school, broke her engagement with her previous fiancé, Jeremy, and why she has not been in touch with her family and friends. Her parents insist on taking her home with them and Paige agrees, assuming she might have married Leo for some mutual benefit and seeks evidence for the marriage. Just as she's about to leave, Leo comes running to play her a voice message in which she sounds very happy and romantic. Paige decides to go back with Leo, hoping it will help her regain her lost memory. Paige is welcomed home with a surprise party by her friends, but as she is not able to remember any of them, she finds it overwhelming and bursts out in anger.
The next day Paige ventures out to her regular cafe but does not remember having been there and loses her way back. She calls her mother because she does not know or remember Leo's number. That evening Leo and Paige are invited for dinner by her parents. At the dinner and in the bar later, Leo does not fit in with her family and friends. He persists in his attempts to help her regain her memory, but Paige is more driven to learning why she left law school and broke her engagement to Jeremy. During the course of one encounter with Jeremy, she kisses him. Her doctor advises her to fill the holes in her memory rather than be afraid of her past. With her sister Gwen's wedding approaching, Paige decides to stay with her parents until the wedding. Though Leo asks her out on a date and spends a night with her, the relationship is further strained when Paige's dad tries to persuade Leo to divorce his daughter, and by Leo punching Jeremy for talking about chances to bed his wife.
Paige rejoins law school and Leo signs divorce papers. At a store, she meets an old friend who, unaware of her amnesia, apologizes for having had a relationship with Paige's dad, thus alerting Paige as to why she had left her family. When she confronts her mother about this, Rita tells her that she decided to stay with Bill for all the things he had done right instead of leaving him for one wrong act. Paige then asks Leo why he never told her, and he replies he wanted to earn her love instead of driving her away from her parents. Paige, while in class, starts sketching; thus depicting how she first left law school. She continues her interest in art, eventually returning to sculpting and drawing. Though Jeremy confesses he broke up with his present girlfriend, hoping to be back with her, she turns him down stating she needs to know what life would be like without him.
As seasons change, Leo discusses his philosophy about "Moments of impact". "A moment of impact whose potential for change has ripple effects far beyond what we can predict. Sending some particles crashing together, making them closer than before. While sending others, spinning off into great ventures, landing where you never thought you’d find them..." Back in her room, Paige finds the menu card on which she had written her wedding vows and is deeply moved. The movie ends with Paige finding Leo at their regular Cafe Mnemonic and going with him to try a new place instead of their regular alternative.

Thanks for watching The Vow (2012 English Film) Full Movie