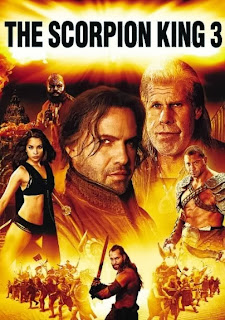 A handful of years after giving Mathayus the prophecy that his peaceful kingdom wouldn't last forever, Cassandra dies. Mathayus allows his kingdom to fall apart in the aftermath of the deadly plague which claimed his wife's life and he believes his reign of nobility to be over. Mathayus then becomes a mercenary once more, just as he was after his battle with Sargon and prior to his war with Memnon. Egypt is then divided into three kingdoms, one belonging to Talus, one to Horus and one to Ramusan. Talus' army grows to such an extent that he wishes to conquer Horus' Kingdom and to do so, he wishes to steal the Book of the Dead from Ramusan. To stop Talus, Horus hires Mathayus and pairs him up with the Scandinavian warrior Olaf. In turn, Talus kidnaps Ramusan' daughter, Silda. Ramusan then tells Mathayus that if he can save his daughter, he will have the right to wed her and once again raise a kingdom in Egypt.
Before Mathayus manages to rescue Silda, she is whisked away by the ninja army of the mysterious 'Cobra'. Talus hires Mathayus and Olaf to bring back the princess as well as Cobra's head. They wind up in an exiles' camp lead by Cobra, who turns out to be Silda herself. Talus then arrives at Ramusan's palace and takes the Book of the Dead. With this he reanimates the dead warriors Zulu Kondo, Agromael and Tsukai. In a test to see their strength, Talus orders them to kill his best men, which they do easily. Tsukai and Zulu Kondo are ordered to attack the exiles' camp. Working together, Mathayus, Olaf and Silda's ninjas manage to defeat Zulu Kondo in battle. However, Tsukai manages to escape.
Mathayus and Olaf return to Ramusan's palace, now Talus' headquarters. They pretend to have rescued Silda and present a severed head supposedly belonging to Cobra. Talus still intends to marry Silda and takes her to his sleeping chambers. Mathayus attacks Talus, who is saved by the timely intervention of Tsukai. Mathayus pursues Talus while Silda faces Tsukai. At the same time, Olaf attempts to get the Book of the Dead but has to fight Agromael. While Talus faces the wrath of the ninjas, Mathayus somehow finds the ailing Ramusan and together they use the Book of the Dead to prevent Tsukai and Agromael from killing Silda and Olaf, respectively.
With Ramusan dying in his daughter's arms and Talus left to face the wrath of the ninjas, Tsukai and Agromael bow down to Mathayus as the new ruler of Ramusan and Talus' kingdoms. When Horus arrives at the city gates, he is greeted by Mathayus, who has taken up the mantle of Scorpion King once more.
In a post-credits homage, it's revealed Mathayus and Silda shared a kiss on the night of their earlier party, though Silda appears to leave the prospects of a relationship with him behind as she bestows him the artifact which could one day be used to contact Anubis. While Mathayus may still have a while before deciding to lead his people on his fated quest to take over the known world, his destiny is now more clear than ever in the subtly more militiant stance he has taken compared to where he was at the end of the prior original film, with the Book of the Dead left intact for the subsequent events in The Mummy and the Scorpion King's own journey paved for the opening sequence of The Mummy Returns.

Thanks for watching The Scorpion King 3: Battle for Redemption (2012 English Film) Full Movie