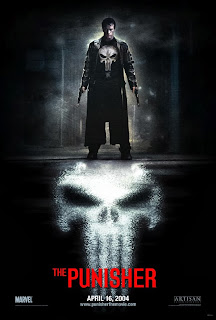 When Bobby Saint and Mickey Duka meet with European arms dealer Otto Krieg at the Tampa, Florida seaport, the FBI intervenes and Saint is killed while Duka is jailed. "Krieg", supposedly killed in the shootout, is actually undercover FBI agent and former U.S. Army Delta Force operator Frank Castle (Thomas Jane). Shortly thereafter, he retires from the FBI and attends a family reunion at his father's oceanside home in Aguadilla Bay, Puerto Rico. Tampa crime boss Howard Saint (John Travolta) is enraged by the death of his son, and with right-hand man Quentin Glass (Will Patton) bribes the FBI (specifically a debt-ridden close friend of Castle's) for confidential information about "Krieg". Once he finds out that "Krieg" is really Castle, Saint orders Castle murdered, and Saint's wife, Livia (Laura Harring), demands that Castle's entire family be killed as well to "settle the score".
At Castle's family reunion, gunmen including Glass and John Saint, Bobby's identical twin, kill most of the extended family. Castle and his father (Roy Scheider) kill several of the attackers before Castle's father is killed. Castle's wife (Samantha Mathis) and son try to escape in a jeep, but Saint runs over them with a truck, killing them. Castle, shot in the chest and blown off a pier in an explosion set by Glass, survives and is nursed back to health by a local fisherman, Candelaria.
Once recovered, Castle travels to Tampa and takes refuge in an old tenement where three young outcasts—Dave, Bumpo and Joan—live. Castle abducts Mickey Duka, who fearfully gives up information about the Saints, but soon willingly becomes Castle's mole, given that he despises the Saints as much as Castle does. Castle starts exacting revenge on the police and FBI agents who have been bribed to close the investigation of his family's murder. In the process, he sabotages Saint's money-laundering business and severs Saint's partnership with Cuban mobsters the Toro Brothers, and starts tailing Livia and Glass, whom he learns is a closeted homosexual.
Saint, realizing Castle is alive, sends two assassins to kill him. Castle kills the first, guitar player Harry Heck, by shooting a ballistic knife into Heck's throat. The second is "the Russian", a behemoth who beats Castle in a brutal fight but is defeated when Castle throws boiling oil in his face, blinding him long enough for Castle to throw him down a staircase, breaking his neck. Moments later, Saint's men arrive, led by Glass and John Saint. Dave, Joan and Bumpo hide Frank and refuse to tell Glass where he is, despite Glass pulling out Dave's multiple facial piercings with a pair of pliers. They leave a man behind to kill Castle upon his return, but Castle kills him once Glass and the others are gone. Dave is taken to the hospital, and Castle makes preparations to finish the fight against Saint, despite Joan's attempts to persuade Castle not to.
With assistance from Mickey, Castle manipulates Saint into believing Glass and Livia are having an affair. Saint, unaware Glass is gay, and believing Livia to be capable of cheating on him, kills each of them personally, neither of them knowing why. In desperation, Saint provides each of his henchmen with $50,000, and offers $50,000 more to whoever manages to find and kill Castle.
Castle, however, attacks Saint's headquarters, the downtown Tampa nightclub Saints and Sinners, killing many of Saint's henchmen. He also kills John Saint, who is trapped under collapsed debris, by having him hold an eight-pound, trip-wire activated grenade in his fully extended arm until his arm wearies and the grenade explodes. Castle wounds Howard Saint with a pistol when Saint attempts to shoot him in the parking lot of the nightclub. Castle then ties Saint to a slow-moving car, but not before revealing that Glass and Livia were not having an affair. Several hidden bombs go off, killing Saint in the process; the destruction and wreckage culminate in the shape of the Punisher's iconic skull.
Later that night, Castle returns to his apartment and prepares to commit suicide, but after a brief vision of his wife, decides to continue his vigilante mission against others who in his mind deserve punishment. Before departing on his next mission, he leaves most of Saint's money for Bumpo, Joan and Dave. On the Sunshine Skyway Bridge, he vows, "Those who do evil to others—the killers, the rapists, psychos, sadists—will come to know me well. Frank Castle is dead. Call me... the Punisher."

Thanks for watching The Punisher (2004 English Film) Full Movie