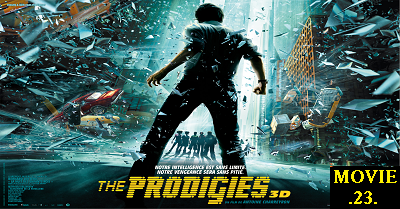 Ten year old Jimbo Farrar is a gifted child who is misunderstood and regularly beaten by his parents. One day he is badly beaten by his father while his mother cheers him on. Jimbo is carried away by his anger and loses control of his abilities, when he wakes up he finds his mother was beaten to death by his father who then hanged himself.
Locked in a psychiatric hospital, Jimbo is visited by the billionaire Mr. Killian, who decides to take him under his wing to teach him how to control his abilities.
Twenty years later, Jimbo Farrar is a brilliant scholar working in the Mr. Killian Foundation for Gifted Children, and married to anchorwoman Ann, who is pregnant with his child. He creates an extremely complex online game to find young children who have abilities like him.
Five unrelated teens solve the game and hack into the system to ask "where are you?. Jimbo leaves to recruit the teens, who are from various backgrounds, to go enroll at the Foundation. He finds when he returns that Killian has died. The Foundation is now controlled by Melanie, Killian's daughter, who doesn't want Jimbo to continue recruiting new candidates. Jimbo has the idea of instead creating a televised competition to find future geniuses. The gameshow is used to bring in the five recruits Jimbo already has: Gil, an abused child; Liza, a young girl training to be a supermodel; Lee, an Asian girl who helps at her parents' store; Harry , an African American whose mother has a gambling problem; and Sammy, the overweight son of a wealthy family.
The five identify each other immediately and meet secretly in Central Park. No sooner are they together that two thugs assault Liza. Jimbo did not go to the meeting since he learned that Ann is pregnant and chose to be with her. He gets a message and mentally connects with the Five. He scares away the thugs before he finds Lisa in a coma and everyone else in shock. The next day he learns that Melanie wants to cover the incident up. Furious, he demands an explanation. Melanie fires him since he was her father's favorite and not her. Jimbo swears to protect other four and locks himself up, afraid he might get as angry as he did the day his parents died.
Under the leadership of Gil, the four friends infiltrate the archives of the Killian group where they find the recordings of Jimbo when he was in the hospital. He talks about his mental abilities and other "child-kings" who had the same (Killian was one). Gil, Sammy Lee and Harry avenge Liza, by killing the two thugs. But they also kill the police officer who covered it up and his wife, using their powers to take over the bodies of others.
Jimbo does not know what to do: Melanie refuses to let the game continue, but teenagers are demanding justice. One evening, while he tries to reason with the four friends, Jimbo finds they doubt him and put him to the test by ordering him to kill Jenkins. Jimbo, having promised young Killian to stop using this power, refuses. So they kill Jenkins themselves and put the blame on Jimbo, who quietly goes to jail. When Liza wakes up from the coma, Ann asks for her for help, but the girl uses her power over the baby. It is up to Melanie, to organize the final genius competition at the White House, attended by the President of the United States. When Jimbo discovers Ann's betrayal, he uses his power to break out of jail and join Liza in getting to the children, Melanie Ann and the White House.
At the White House Liza triggers a security plan where everyone in the Oval Office is sent to a secure bunker. Once locked in the four children manipulate the soldiers and bodyguards who begin killing everyone. Gil launches an atomic bomb at the Killian campus. Jimbo finally managed to join them in the bunker, where he realizes that Gil heads the group. The two clash in a battle of powers, but then Jimbo gets shot. While Jimbo lays dying, Harry convinces his friends to stop, forcing Gil to cancel the nuclear missiles. Jimbo dies shortly after.
Three months later, the Killian group is bankrupt. Pregnant Ann receives a package with a video message from Jimbo before he died. Liza left it before she disappeared with Harry and Sammy Lee in search of other "child-kings".