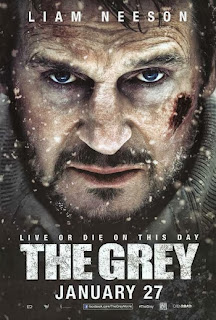 John Ottway (Liam Neeson) works in Alaska, killing wolves that threaten an oil drilling team. On his last day on the job, Ottway writes to his wife, Ana (Anne Openshaw), a letter explaining his plans to commit suicide. However, he doesn't follow this through. The next day, the plane carrying the team, including Ottway, crashes in a blizzard. Ottway sees a vision of his wife urging him not to feel afraid, and awakens to find one of the team, Lewenden (James Badge Dale), mortally wounded. Ottway calms him, and Lewenden dies. Taking charge, Ottway sets the survivors the task of building a fire. While doing this, he discovers a corpse, and is attacked by the gray wolf feeding on it. After saving Ottway, the group surmises that they are in the wolves' territory. They decide to take turns keeping watch for the predators.
Later, Hernandez (Ben Bray) is killed by two wolves, and the group discovers his body in the morning. Ottway suggests they leave the crash site, but Diaz (Frank Grillo) questions his leadership. While searching for the wallets of their deceased colleagues, intending to return them to their families, Diaz finds an emergency wrist watch containing a radio beacon. The group then leaves the site. While walking through the snow, Flannery (Joe Anderson) falls, and is killed by wolves. One of the group sees a pack of wolves approaching, and the survivors run for the trees, lighting a fire in an attempt to ward off their attackers. The group sets about producing makeshift weaponry, and Diaz threatens Ottway with a knife, but is disarmed. They then kill and eat an omega wolf sent by the pack leader to test them. Diaz, as a symbol of defiance, cuts the head off the cooking corpse and throws the head back at the pack, a move noted by the group as unwise, as wolves are the only creatures known to take revenge. While sitting around the fire, Diaz tells the group of his atheist beliefs, and Talget (Dermot Mulroney) states he believes in God. Ottway states he is also an atheist, but wishes he could believe. He also recites a poem written by his father. A blizzard approaches, and the survivors set to maintaining the fire.
In the morning, Burke (Nonso Anozie), who had been suffering from hypoxia, is found dead. The remaining survivors leave the camp, and travel to the edge of a steep canyon. They secure a line, and Diaz and Ottway traverse the canyon. Talget, however, is afraid of heights, and loses his glasses. His injured hand becomes caught on the rope, which breaks. He falls to the ground and is dragged away by wolves. Diaz attempts to save Talget but fails and injures his knee. The three remaining survivors continue and arrive at a river. There, Diaz explains that he would rather die there than return home to a meaningless life. He refuses offers of help and asks Ottway whether death would bring him comfort. They part company, and Ottway and Hendrick continue on together. Left alone, Diaz hears the wolves approaching. Further long the river, Ottway and Hendrick are set upon by wolves once again. In an attempt to flee, Hendrick falls into the river and is trapped beneath the surface. Ottway attempts to save him but is unsuccessful, and Hendrick drowns.
Ottway, cold and wet, continues on alone. Exhausted and disoriented, he stumbles right into the wolves' den. Surrounded by the pack, Ottway places his colleagues' wallets in the snow, along with the undelivered letter to his wife. As the alpha wolf approaches him, he arms himself with a knife, the wire antenna from the emergency wristwatch and shards of glass from mini whiskey bottles taped to his hand. After reciting his Father's poem once more, he lunges at the alpha wolf. The screen cuts to black and the ending is left ambiguous.
In a post-credits scene, the back of Ottway's head is seen lying on top of a panting wolf's belly. The ultimate fate of both Ottway and the wolf is not made clear.