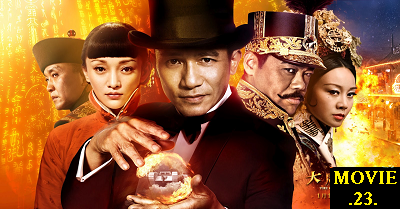 In the years after the Revolution that overthrew the Qing Dynasty in China and established the republic, China broken up into fiefdoms held by warlords, who are busy fighting each other. A lieutenant, Liu Kun Shan (Wu Gang), used magic to scare convicts into joining a warlord's army. His warlord, Lei Bully (Lau Ching-wan), had imprisoned a girl, Liu Yin (Zhou Xun), and wanted her to be his seventh wife willingly. A group of local revolutionaries wanted to kidnap Lei and bring back the republic. They teamed up with a magician, Chang Hsien (Tony Leung Chiu-Wai), to entice Lei to a magic show and kidnap him during the show. It was revealed that Zhang and Liu Yin were ex-lovers in the past and Zhang was an apprentice of Liu's father, a magician, Liu Wan Yao. Chang discovered his former master was imprisoned by Liu Kun Shan as he wanted to extract a magic secret from Liu Wan Yao.
The two ex-lovers met during Chang's magic show. Chang wanted to run away with Liu Yin but she refused to leave Lei to ensure her father will not be killed. Lei and Chang became close friends despite knowing of each other's background and pretending that they did not know. Chang discovered that his master was tortured by Liu Kun Shan and that he has a secret to hide and informed Lei. Lei asked Chang to investigate Liu Kun Shan and subsequently discovered that Liu Kun Shan is a member of the Qing Dynasty remnants and wants to bring back the Dynasty by collaborating with the Japanese.
Lei discovered that Liu Kun Shan had an affair with his third wife and demanded both of them to leave. With his cover blown, Liu Kun Shan and the Japanese launched an attack at Lei and his fellow warlords but Chang and Lei planned an elaborate scheme to deceive that Lei and Liu Yin are dead. With the rest of the Qing Dynasty remnants, Liu Kun Shan tried to raise an army by magic via Chang. However, the scheme was revealed and the Qing Dynasty remnants were killed or arrested. Lei subsequently disbanded his army and gave away his riches to pursue Liu Yin. Liu Yin decided not to follow either Lei or Chang and both Lei and Chang chases Liu Yin on equal grounds.