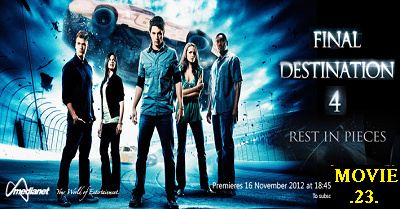 Nick O'Bannon (Bobby Campo) has a premonition in which multiple race cars will pile-up at the McKinley Speedway. Before his vision becomes a reality, Nick immediately persuades his friends Lori Milligan (Shantel VanSanten), Janet Cunningham (Haley Webb), and Hunt Wynorski (Nick Zano), security agent George Lanter (Mykelti Williamson), and spectators Jonathan Groves (Jackson Walker), Andy Kewzer (Andrew Fiscella), Samantha Lane (Krista Allen), Carter Daniels (Justin Welborn), and Nadia Monroy (Stephanie Honoré) to leave the stadium. When Nick hears the deaths of the survivors, he learns about the previous disasters from the first three films and realizes that Death is coming for him. Once again, the other survivors are killed in a series of bizarre accidents except Janet, who is rescued just moments before her death thanks to Nick's visions. This leads other survivors to believe they have beaten by Death until Nick has another premonition of a disastrous explosion at a shopping mall where he eventually rescues Lori and Janet. Although Nick manages to stop this disaster, he, Lori, and Janet are killed by a runaway semi in the cafe two weeks later. This is the first Final Destination film to be shown in 3D.

Hint: The full movie of The Final Destination (2009) will open in new tab.