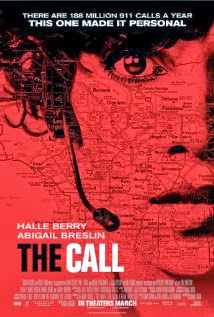 A Los Angeles Police Department veteran 9-1-1 operator, Jordan Turner (Halle Berry), receives a call one night from a teenage girl, Leah Templeton (Evie Thompson), fearing for her life as a man breaks into her home. Jordan calmly advises her to conceal herself upstairs, but when the call is disconnected, Jordan calls Leah back, giving away Leah's hiding spot to the intruder. Jordan attempts to dissuade him from going further over the phone. He responds "It's already done" and hangs up, leaving her distraught. A few days later, Jordan sees a television report confirming that Leah has been murdered. Emotionally affected by the incident, Jordan tells her boyfriend, Officer Paul Phillips (Morris Chestnut), that she can no longer handle field calls.
Six months later, she is working as a trainer for 9-1-1 operators. Simultaneously, teenager Casey Welson (Abigail Breslin) is kidnapped from a mall parking garage after parting with a friend and forced into the trunk of a car. Casey's friend had forgotten her cellphone, so Casey is able to use it to call 9-1-1. A rookie operator (Jenna Lamia) receives the call and cannot handle it, and Jordan overhears the situation and takes over. Casey is using a disposable phone, so her exact GPS location cannot be found. While the kidnapper drives, Jordan guides Casey through knocking out a tail light and signaling people in nearby cars. One woman who sees Casey waving her arm out of the trunk of the car calls 9-1-1, allowing the police to narrow their search. The man ends up killing one person and burning another who tries to intervene and switches cars with one victim, Alan Denado (Michael Imperioli), to elude the police. However, he inadvertently leaves fingerprints at the scene of the car switch, and the police are finally able to determine his identity as Michael Foster (Michael Eklund).
Upon arriving at his destination, Michael removes Casey from the trunk and finds the phone in her pocket, with 9-1-1 listening on the line. Through the phone, Jordan informs him that his identity is uncovered and advises him to turn himself in and not hurt the girl. Before smashing the phone, Michael responds, "It's already done", and Jordan realizes Michael is the same culprit who killed Leah. Meanwhile, Paul, accompanied by Officer Jake Devans (David Otunga) and others in law enforcement, raid Michael's home to look for clues. Finding a photo of Michael and his sister, Melinda, they realize that Casey resembles the latter. Additionally, the house seen in the photo is eventually revealed by Michael's wife to have burned down, although a nearby cottage still remains. The police raid it, but find nobody there and leave. Determined to catch the killer, Jordan drives to the secondary home where she finds a number of photos of Michael with his leukemia-stricken sister. Stepping outside, she recognizes sounds from an outdoor flagpole, reminiscent to sounds heard in the background in the final moments of the 9-1-1 call. She also finds a trap door amid dirt and scrub located where the primary house once stood. After she accidentally drops her cellphone down the cellar, she climbs down in without calling the police.
Navigating the cellar, Jordan hides from an emerging Michael. The cellar itself pieces together Michael's back-story. Michael had incestuous feelings towards his sister and was distraught when she fell ill, lost all of her hair and passed away. Michael has a prop head that he keeps in the cellar that he treats like his sister. He has also been scalping and killing young girls who have similar blond hair, trying to find scalps that match his sister's hair. Jordan soon finds Casey strapped down to a dentist chair and attacks Michael as he begins to lacerate her. She frees Casey, and they both manage to gradually escape the cellar. Michael pursues them, and they are able to injure and kick him back down into the cellar, rendering him unconscious. While he is knocked out, they tie him to a chair. When he regains consciousness, they inform him that they plan to leave him to die and claim that Casey had escaped, Jordan found her in the woods, and Michael simply disappeared. He tells them they cannot just leave him there. As they walk out, Jordan recites his words, "It's already done", then closes and locks the door behind her.

Thanks for watching The Call (2013 English Film) Full Movie