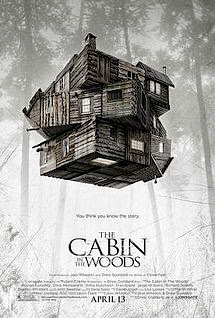 Working from a hidden underground facility, senior technicians Gary Sitterson and Steve Hadley initiate plans for a mysterious ritual - reportedly one of several others taking place around the world. Also present is specialist Wendy Lin, who discloses that a similar operation undertaken by their Swedish counterparts has just ended in failure.
Meanwhile, American college students Dana Polk, Holden McCrea, Marty Mikalski, Jules Louden, and Curt Vaughan are spending their summer vacation at a seemingly deserted cabin in the forest. It soon becomes clear that Sitterson and Hadley are manipulating this setting from afar, even intoxicating the teenagers with psychotropic drugs that gradually hinder rational thinking while increasing libido. After the door to the cabin's darkened cellar swings open on its own during a tipsy game of Truth or Dare, both technicians coerce their charges into investigating the contents within.
The group soon uncovers a plentiful assortment of bizarre articles, including an old diary once maintained by Patience Buckner, a former cabin resident abused by her sadistic family. Dana, who takes an interest in Patience, subsequently recites incantations from the journal and inadvertently summons the zombified Buckner clan. Leaving Dana, Holden, and Marty behind with the book, Curt and Jules retire outside - where Hadley successfully induces them to have sex. Set upon by marauding Buckners, Jules is decapitated but Curt escapes, sounding the alarm. Marty, a frequent marijuana smoker, becomes justifiably paranoid, declaring that unseen figureheads have been toying with their crisis. Locating concealed surveillance equipment, he theorizes that the predicament may be a gimmick for reality television before being dragged off to be killed by Judah Buckner.
Sitterson and Hadley weren't pleased when they learn that their counterparts in Japan, Argentina, and Spain have failed to pull off their ritual. A terrified Curt, Holden, and Dana attempt escape in their RV, though Sitterson triggers a tunnel collapse, rendering the highway impassable. Curt jumps a ravine on his motorcycle in a desperate bid to reach an adjoining road, but is killed crashing into a camouflaged force shield - apparently erected by the technicians. His demise convinces Dana that Marty's concerns may have been founded.
Veering off the tarmac, the RV plummets into a nearby lake after Father Buckner surfaces inside and stabs Holden. Dana survives the impact, but is confronted by Matthew Buckner when she swims ashore. As he delivers his final blow, the Facility staff celebrate the completion of their ritual. Sitterson receives a phone call informing him that Marty is still alive. Rescuing Dana, Marty reveals that he was able to overpower his assailant upon being taken into an obscured elevator. They infiltrate the Facility, where a menagerie of monsters are imprisoned. Dana observes a cenobite-like creature clutching a globe she observed in the cabin's cellar, indicating that the items there dictate which monster will be unleashed on its concurrent occupants. She and Marty are cornered by a private security team after hearing the Director's voice, yet manage to release the monsters which slaughter the Facility's staff. Sitterson manages to escape, but is accidentally stabbed by Dana in the lower levels of the building.
Upon entering an underground temple, the two survivors meet the project Director who explains that every year worldwide rituals commence to appease malevolent beings identified only as "Ancient Ones"; living beneath the Facility, they are kept in perpetual slumber through an annual pars pro toto sacrifice of five young people embodying certain archetypes: the Whore (Jules), the Athlete (Curt), the Scholar (Holden), the Fool (Marty), and the Virgin (Dana). The order in which intended victims perish is flexible, as long as the Whore is first and the Virgin is last. The Director urges Dana to shoot Marty, completing the ritual, but they are interrupted by a werewolf which Marty fends off after it attacked Dana. Patience Buckner arrives killing the Director and Marty knocks them into the Ancient One's chasm.
Dana and Marty accept that it might be better for another species to take humanity's place if this is the price of its continued existence. They share a final joint as an Ancient One finally stirs, destroying the Facility.