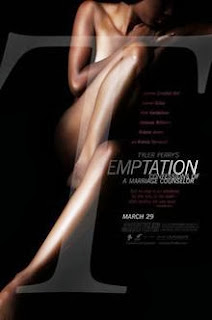 The film opens with a marriage counselor working with a young couple having problems. The wife claims they are not the same people anymore and married young which starts an argument. The husband walks out and the counselor suspects the wife is considering having an affair. She then proceeds to tell a story about her sister named Judith (Jurnee Smollett-Bell).
Judith is a therapist working at a matchmaking agency owned by Janice (Vanessa L. Williams). She is married to her childhood sweetheart Brice (Lance Gross) whom she has known since she was six. Brice and Judith attend the same church as her mother Miss Sarah (Ella Joyce), a devout Christian with strong beliefs. Brice is a pharmacist and is soon introduced to a new employee, Melinda (Brandy Norwood). Melinda soon reveals that she is on the run from an abusive boyfriend, who had tried to kill her. Judith is dissatisfied with her job and anxious to start her own business in marriage counseling, but Brice is cautious and tells her to wait until they are more financially stable, which frustrates Judith. She is further frustrated when Brice refuses to confront men who catcall her on their way home from dinner.
Judith later meets Harley (Robbie Jones) while at work, a wealthy Internet entrepreneur who wants to invest in Janice's business. Harley attempts to seduce Judith as they work late together over the matchmaking surveys. When Harley questions as to why there is no discussion regarding sex, Judith reveals that she does not believe in premarital sex. Harley concludes Judith's sex life is boring and on a schedule, which leads Judith to question her sex life with Brice. She tries to spice up their sex life later at home, only to be rejected.
For her birthday, Judith does something new with her hair and makeup. Brice fails to notice and forgets about her birthday. Later at work, she is sent flowers and happily believes them to be from Brice. However, Harley arrives and immediately takes notice of her change in appearance, revealing the flowers are actually from him. When Judith questions why he is always meeting with her, Harley admits he is willing to do anything just to be near her. At home, Brice still has no idea that it is Judith's birthday. Judith reminds him by leaving a cupcake with a candle in it on the counter. Realizing his mistake, Brice makes it up to her by dancing in a cowboy outfit and singing. The two happily make up.
Judith is sent to New Orleans with Harley to finalize a deal with shareholders. Janice tells her to flirt with Harley, but not to compromise herself and to be careful. Judith gives coworker Ava (Kim Kardashian) permission to make her over, switching to more sexy clothes, before joining Harley on a private jet for the trip. Once in New Orleans, Judith and Harley seal the business deal and go out drinking, eating, dancing and sightseeing together. On the way home, Harley makes a move on her and, although initially resistant, she gives in and they have sex on his plane.
Harley takes Judith home where he meets Miss Sarah for the first time, having already met Brice. Judith is increasingly bored with her husband's inattentiveness and sneaks out to meet Harley for sex. Harley keeps demanding that she leave her husband, promising to jump-start her career in the marriage counseling business. Brice, noticing her sudden closeness to Harley, surmises she is having an affair. He pleads with her to come back, insisting he loves her and is willing to forgive her, but Judith refuses and chooses to stay with Harley.
Judith returns to the apartment she shared with Brice to retrieve a laptop and is surrounded by a prayer circle of her mother and members of the church. Sarah begs Judith to stay and grabs her in an attempt to prevent her from leaving. Harley knocks Sarah to the ground and snatches Judith away, forcing her to leave. Back at Harley's, Judith is furious over how her mother was treated and yells at him for it, and Harley ends up beating her. Brice is having dinner with Melinda at her apartment and when bringing up the topic of dating again, she reveals that she has HIV and contracted it from her ex who is revealed to be Harley. Brice immediately drives to Harley's place and rescues Judith after finding her beaten in the bathroom. He beats Harley and is stopped by Melinda who rushes inside to calm things down. The two then leave Harley beaten on the floor.
In present times, the marriage counselor concludes the story and the client asks what happened to Judith. The counselor says she is alive, but HIV positive. Her client thanks her for sharing the story and decides to stay with her husband and end her almost-affair.
The marriage counselor leaves work and heads to a nearby pharmacy run by Brice, now visibly older. The counselor is revealed to be Judith herself who has been telling her own story to her clients. Brice and Judith briefly talk and Brice's new wife and son come to visit him at work. After briefly staring at Brice with his new family, Judith turns to leave to meet her mom at church, clearly with regrets.

Thanks for watching Temptation: Confessions of a Marriage Counselor (2013 English Film) Full Movie