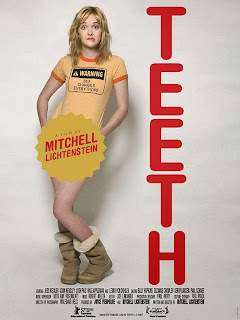 Dawn O’Keefe (Jess Weixler) is a teenage spokesperson for a Christian abstinence group called The Promise. She attends groups with her two friends, Alisha (Julia Garro) and Phil (Adam Wagner). One evening after giving a speech about the purity ring worn by members of the group, she is introduced to Tobey (Hale Appleman) and finds him attractive. The four begin going out as a group. Dawn has fantasies about marrying Tobey, although after acknowledging the attraction, they agree that they cannot spend time together. Soon after they give in and meet at a local swimming hole. After swimming together, they go in to a cave to get warm and begin kissing. Dawn gets uncomfortable and tries to get them to go back. Tobey then attempts to rape Dawn, who panics and tries to push him off. Tobey becomes aggressive and shakes Dawn, resulting in her smacking her head on the ground. While she is dazed, Tobey takes the opportunity to begin raping her. Dawn fights back and inadvertently bites off his penis with her vagina. A horrified Dawn stumbles away and she flees the scene. After a Promise meeting, she meets her classmate Ryan (Ashley Springer) at a dance; they talk, and he drops her off at her home.
Dawn drops her purity ring off a cliff and goes back to the swimming hole. She screams in horror when she sees a freshwater crab crawling on Tobey's penis. She then researches "vagina dentata" and realizes she may have it. She visits a gynecologist, Dr. Godfrey (Josh Pais), in an attempt to find out what is happening to her. When he examines her, she panics and her vagina bites off all four fingers on his right hand. While biking home, she encounters a police officer driving Tobey's car. The cop demands that she pull over to the side of the road. After the stop, she decides to go back to visit the pool to investigate. When she arrives, she sees the police bringing up Tobey's body. Meanwhile, back at home, her ill mother Kim O'Keefe (Vivienne Benesch) collapses. Dawn's stepbrother Brad (John Hensley) and his girlfriend Melanie (Nicole Swahn) hear her collapse but ignore her, continuing to have sex while she lies on the floor. Dawn's mother is taken to the hospital.
Dawn goes to Ryan seeking help and the two successfully have sex. The following morning they have sex again, but mid-coitus Ryan’s friend calls. Ryan smugly boasts that he and the friend had bet on whether he could score with Dawn. In her anger, her vagina bites off his penis, and she leaves him to call his mother for help. Dawn learns her mother has died, leading her stepfather Bill (Lenny von Dohlen) to attempt to throw Brad out, but Brad sets his dog on Bill. Dawn meets her stepfather and Melanie at the hospital and, emboldened by her power, she goes back home to seek revenge. Dawn puts on make-up and goes to seduce her stepbrother. In the midst of the act, Brad recalls that, while still kids, Dawn bit his finger, but it was not her mouth that bit him. As he realizes this, Dawn’s vagina bites off his penis. She releases it on the ground and Brad’s dog eats it, spitting out the glans and genital piercing. Dawn leaves him whimpering and maimed on his bed.
Dawn cycles away from home, but her bike tire sustains a puncture, so she begins hitchhiking. She gets a lift from an old man (Doyle Carter), but falls asleep and rides for several hours, waking up after nightfall. When she tries to get out, he repeatedly locks the doors. He licks his lips as if to ask for a sexual favor to release her; Dawn hesitates, and then looks towards the camera—and the old man—with a seductive smile.