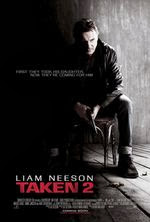 The funerals of the Albanian mobsters killed by Bryan Mills (Neeson) in the prior film are held in Tropojë, Albania. Murad (Šerbedžiia), the leader of the gang and father of Marko—whom Bryan had killed by electrocution—vows to capture Bryan, bring him to the graves and avenge their loved ones. Murad and his men torture Jean-Claude Pitrel (Rabourdin) (the corrupt policeman from Taken) to try to learn Bryan's location. They end up bribing an official for the information.
Kim (Grace) and her mother Lenore (Janssen), who is currently having marital problems, surprise Bryan by joining him in Istanbul, Turkey, where he has just finished a three-day security job. The next day, Lenore and Bryan go out for lunch. Bryan realizes they are being followed. After a chase, the men capture Lenore, forcing Bryan to surrender, but before he does, he calls Kim and warns her. Her would-be abductors shoot another hotel guest and two security guards, but fail to find her and are forced to flee.
Bryan wakes with his hands tied to a pole in a dark room. Using a phone that he had hidden in his sock, Bryan calls Kim, instructing her to go to the US Embassy and tell them what happened, but she begs for a chance to help him and Lenore. Under Bryan's guidance, she opens his suitcase, containing weapons, and throws a grenade onto a deserted rooftop parking lot. Bryan uses the time it takes for the sound of the explosion to reach him to help locate where he is. He then has her take a gun and two more grenades and take to the rooftops.
While he is tied up, the Albanian mobsters bring in a struggling Lenore. One takes a knife and makes a small cut to her throat before hanging her upside down by chains. They tell Bryan he has to watch her bleed out and die before he dies. When the mobsters leave Bryan is able to undo his chains, take Lenore down, and call Kim to detonate two more grenades so he can determine his location. The grenade detonations enable Bryan to guide Kim close enough to see steam he sends up a chimney to mark his precise location. Kim tosses the gun down the chimney. Bryan uses it to kill the Albanians in the building, then saves Kim from her rooftop pursuer. Lenore, however, is taken away by her captors.
Leaving Kim at the embassy, Bryan retraces the route to Murad's safe house he memorized from his abduction. After killing the rest of the gangsters and rescuing Lenore, he confronts Murad, who confirms Bryan's guess that his two remaining sons will seek revenge if Bryan kills him. Bryan offers to let Murad live if he gives his word to end his vendetta. When Murad nods his head, Bryan drops his gun and starts to walk away. Murad seizes it and tries to shoot Bryan, only to discover that Bryan has removed the bullets. His actions proved his untrustworthiness, and he is quickly killed by Bryan.
Three weeks later, the Mills family are at a diner back home in Los Angeles to celebrate Kim passing her driving test. They are joined, much to Bryan's surprise, by Kim's boyfriend Jamie. Kim jokingly asks her father not to shoot him.