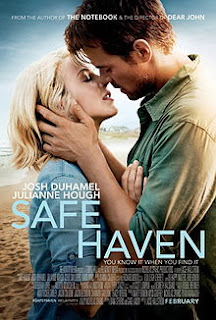 A young woman (Julianne Hough) flees her house after being shown in possession of a bloody knife. She is shown moments later buying a bus ticket, her hair now cropped and bleached, and stops at a small North Carolina town called Southport. At the general store, she introduces herself as Katie. After acquiring a job as a waitress and buying a small house on the edge of town, Katie becomes friends with her neighbor, Jo (Cobie Smulders) and meets handsome Alex Wheatley, (Josh Duhamel), the manager of a local convenience store, and his two children, Lexie and Josh. Alex's wife tragically died of cancer a few years prior.
Alex immediately takes a liking to Katie, doing small helpful things, such as leaving an old bike at her house. They go on a 'family' trip to the beach, and Alex asks her to go canoeing with him, after which, they fall in love. Lexie immediately accepts Katie, while Josh is initially resistant, believing Katie to be his late mother's replacement, but eventually accepts her as well. Meanwhile, Kevin Tierney, a Boston police officer, searches for Katie and, using his authority as a police officer, sends out reports saying that she is a wanted murderer. Upon seeing her picture in the police station, Alex confronts Katie and becomes angry that she didn't trust him enough to even tell him her real name, Erin. The picture flashes to Kevin's boss confronting him at work, pointing out he always carries a water bottle that turns out to be filled with vodka, and reveals that Erin was Kevin's wife.
Directly afterward, Katie is shown packing while talking angrily with Jo. Alex drives over to Katie's house to talk to her, only to discover that she left. He drives to the nearest ferry and admits he's fallen in love with her and promises to protect her no matter what. Initially, Katie wants to flee but then she decides to stay in Southport and she and Alex help prepare the town for the upcoming Fourth of July celebration. Later, Katie tells Alex that Kevin is her husband, whom she stabbed with a kitchen knife in order to protect herself from his drunken assault. Meanwhile, Kevin breaks into Katie's former neighbor`s home back in Boston and finds the phone number to the Southport restaurant that employs Katie. He finds the location and makes his way there, very noticeably drunk. Arriving just on time for the Fourth of July parade, Kevin begins his search for Katie through the crowd, belligerent. He finally finds Katie dancing with Josh and watches as Alex leans over to kiss her, which makes him angry. Later, Katie has a dream that she is standing on the docks watching the fireworks when Jo comes up and tells Katie that "he" is here.
Katie wakes up in the convenience store next to a fast asleep Lexie. While she is walking around in the store, Kevin makes his appearance and confronts her, drunk and sobbing and asking her to talk. He asks her to go back home with him, but she refuses and tells him to leave. He pulls out a revolver while Katie asks Lexie to stay up in the second floor of the store, scared that she might see Kevin and become frightened. Meanwhile, Kevin is pouring gasoline all over the store, with the intent to burn it down. He sits down on the steps with a lighter, deep in thought, and Katie fakes sympathy for him and agrees to return home with him, only to push him into the water by surprise. However, a firework spark lands on the gasoline, igniting a fire that spreads all over the store.
Alex, busy shooting off fireworks, sees the burning store and quickly makes his way across the lake by boat. He stands on the dock, pleading with Lexie to jump into his arms. After a brief hesitation, she finally does. Meanwhile, Katie is wrestling with a soaked Kevin who is attempting to shoot her. After a long struggle, she grabs a hold of the gun and kills him. Soon after, Alex finds Katie and they embrace.
In the aftermath, Alex rifles through a desk, whose contents were spared from the fire, belonging to his late wife, where he finds multiple letters she prepared ahead of time for memorable events such as Josh's eighteenth birthday and Lexie's wedding day. Alex gives Katie a letter with the words "To Her" on the envelope. The letter talks about how if someone is receiving this letter, then Alex loves her without a shadow of a doubt. She says she is thankful for whoever is now reading the letter and thanks the reader for making Alex feel young and in love again. The movie ends by revealing that Jo, who had supposedly left town moments before, was actually the ghost of Alex's dead wife.