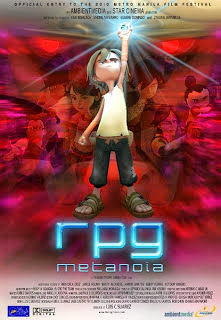 RPG Metanoia is a 2010 Filipino 3D computer-animated adventure film produced by Ambient Media, Thaumatrope Animation and Star Cinema. It is the first full length Philippine animated film presented in 3D. It was an official entry at the 2010 Metro Manila Film Festival. It won the title for 3rd Best Picture, Best Sound Recording and Best Original Theme Song, as well as the Quezon City's Special Citation given for being a Gender Sensitive Movie. The stereoscopy of the film was made by Roadrunner Network, Inc.
The RPG Metanoia 3D movie story revolves around an avid online game named Nico who as an eleven year old boy lives a normal child's life. But when he is playing the MMORPG (Massively Multi-players Online Role Playing Game) called Metanoia, he is an unpredictable vagabond armed with a magic yoyo and with uncanny speed and agility in his skill set.