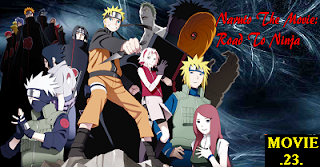 Naruto Uzumaki and his Konoha peers track and confront the Akatsuki who flees from the battle shortly after. Naruto's peers are praised by their families while Naruto wallows in loneliness. That night, Sakura Haruno takes Naruto out to the park to complain about her parents. They are confronted by Tobi who tracked Naruto down when the Akatsuki planted a seal on him. Tobi then uses the technique Gentei Tsukuyomi (限定月読?, lit. Limited Moon Reading) and transports the two into an alternate reality. There, Naruto is known as Menma (メンマ?); Sakura's parents are heroes who defended Konoha from the Nine Tailed Fox with their lives; all their peers have opposite personalities; and Naruto's parents, Minato Namikaze and Kushina Uzumaki, are alive. Shortly after, Naruto and Sakura participate in a mission to retrieve the Red Moon scroll which details on how to defeat an enemy of that world known as the masked man. During the mission, Kushina is injured when she protects Naruto and dissuades Naruto's refusal to bond with his parents.
After successfully retrieving the scroll, the masked man takes Sakura hostage and destroys Konoha. While the Konoha ninjas recuperate, Naruto leaves to exchange the Red Moon scroll for Sakura's life. Naruto receives support from the Akatsuki as he battles the masked man who is revealed to be Menma, Naruto's counterpart. Naruto is victorious but Tobi possesses Menma's body to continue the battle. Tobi's Sharingan erases Naruto's memories which are then restored by the Red Moon scroll allowing Naruto to defeat Tobi and dispel the Gentei Tsukuyomi. Menma, now rid of Tobi's influence, is tended to by Minato and Kushina while Naruto bids farewell to his parents before returning to his world. At Naruto's apartment, Iruka Umino welcomes Naruto home with a cake, reminding Naruto he is not alone.