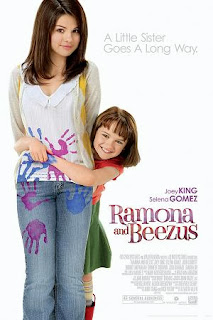 The film opens with adventurous and creative third grader Ramona Quimby (Joey King) playing on the monkey bars during recess with her best friend, Howie Kemp (Jason Spevack). Although Ramona has fun with Howie, her mood changes when she goes home and finds out disturbing news.
Mr. Quimby loses his job and the family is in severe debt. Ramona overhears her parents' conversation and decides that she is going to sell "delishus lemonade" in order to make money. Beatrice (Selena Gomez), Ramona's sister, sees Henry Huggins (Hutch Dano), the paper boy. She accidentally spits lemonade in his face because a fly lands in her glass. She then becomes angry at Ramona, saying that Ramona embarrassed her sister in front of Henry by spitting lemonade in his face and nicknaming her "Beezus," instead of Beatrice (because Ramona couldn't say Beatrice when she was a baby). After that mistake, she decides to have a $20 car wash but that backfires also.
After accidentally painting Hobart's car multiple colors, she retires. The next day, Mr. Quimby accidentally gives her a raw egg in her lunch, and after cracking the egg on her head, gets it in her hair. Mrs. Meacham tries to take the raw egg out of her hair, but most of it remains stuck in her hair. Instead of the photographer saying "Cheese," he says "Peas," causing Ramona to interrupt with a great big "Eww!," ruining her portrait. The next day in music class, Ramona throws up on the drums, causing her to be picked up by Robert. She then stays at home with Beezus. After trying to make dinner for her parents, the pan catches fire. Ramona interrupts Beezus on the phone with Henry, so Beezus yells at Ramona for always being a little pest and ruining her love life. Shocked, Ramona questions Beezus that she has a love life, but neither of them realize that Henry is still on the phone and has overheard their whole conversation. When Ramona goes to feed her cat, Picky-Picky, in the basement later that night, she sees him lying in his basket, dead. Ramona runs upstairs to tell Beezus to come to the basement. They then hold a private funeral in their backyard. In their prayers, they say that Picky-Picky will always be with them. The girls become closer and nicer to each other.
While touching up the garden, Ramona reluctantly helps and grabs the water hose. While doing this, she accidentally squirts Hobart, who is next door with his family in their backyard. Hobart, believing (Ramona and Beatrice's Aunt) Bea had purposely shot him with the water hose, retaliates by tossing a bucket of water on Bea, and a water fight ensues between both neighbors. During the water wars, Ramona whispers to Bea and the family retreats, only to sneak into their neighbor's backyard to set off the sprinklers. After their neighbors admit defeat, Robert tries to turn off the sprinklers, but breaks the shut off valve and the pipes of the sprinklers begin to burst, flooding the backyard. As the backyard fills with water, a shoebox in a ziploc bag pops up from underground. Immediately knowing the contents of the box, Hobart rushes to retrieve it. He calls out to Bea and shows her the keepsakes from the relationship they had as teenagers that he had stored inside the shoebox. Hobart pulls out a ring with a large, purple gem and gets down on one knee and proposes to Bea. She hesitantly accepts and they kiss passionately under the water still spewing from the sprinklers. Both families head into the neighbor's home to dry off, as the open house is occurring at Ramona's house. Furious that her aunt broke her promise not to get "reeled in," Ramona rushes to her house and seeks solace in the attic. The beams are unable to support her weight and break, leaving Ramona's legs dangling from the roof during the open house.
After the open house clears out, Dorothy tends to her scratched up knees and legs in the bathroom. Robert, tired of Ramona's antics, walks in and scolds her for not being mature enough. Feeling she's not wanted, Ramona goes to her room and begins packing to run away, declaring she's going to be gone "Forever." Dorothy tries to talk her out of it, but then devises a plan and helps her pack up a suitcase. Ramona, with her heavy suitcase in hand, heads out of the house with no one to stop her. As she is walking, she imagines traveling to far places, such as New York City, Paris, and Egypt. She finally comes to a bus stop and sits atop her suitcase. It shifts under her weight, so she opens it discovering a bowling ball and a book Robert would draw doodles of Ramona and her mischievous ways. As the bus pulls up, she hears Dorothy over a baby monitor inside the suitcase. The bus takes off without Ramona, revealing her family in their car searching for her. As the family is reunited, Dorothy tells her she purposely packed the bowling ball to make her suitcase heavy, so she could not have gone far.
As Aunt Bea and Hobart's wedding begins, Ramona and Beezus clasp hands as they head down the aisle as bridesmaids. During the ceremony, Howie fumbles his role as ringbearer by dropping the rings. Ramona quickly finds the rings so the ceremony can continue. Afterwards, during the reception, Beezus and Henry share a kiss and then dance. Robert comes across a better job as an art teacher at the elementary school. Ramona excitedly thanks Mrs. Meacham, telling her the family won't have to move after all, to which Mrs. Meacham sarcastically replies that she's looking forward to having Ramona for the rest of the year. Before Hobart and Aunt Bea leave for their honeymoon in Alaska, Ramona runs outside to Hobart's painted Range Rover to give a gift to her Aunt Beatrice: a locket with her school picture.

Thanks for watching Ramona and Beezus (2010 English Film) Full Movie