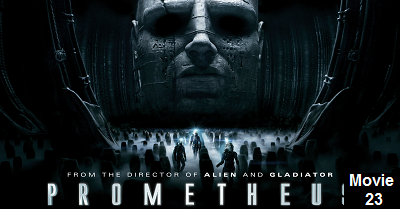 As a hovering spacecraft departs an Earth-like world, a humanoid alien drinks a dark, bubbling liquid, then starts to disintegrate. The alien's remains cascade into a waterfall. His DNA triggers a biogenetic reaction.
In 2089, archaeologists Elizabeth Shaw and Charlie Holloway discover a star map in Scotland that matches others from several unconnected ancient cultures. They interpret this as an invitation from humanity's forerunners, the "Engineers". Peter Weyland, the elderly CEO of Weyland Corporation, funds an expedition to follow the map to the distant moon LV-223 aboard the scientific vessel Prometheus. The ship's crew-members travel in stasis while the android David monitors their voyage. Arriving in 2093, they are informed of their mission to find the Engineers. Mission director Meredith Vickers orders the crew not to make contact without her permission.
The Prometheus lands on the barren, mountainous surface near a large artificial structure, which a team explores. Inside they find numerous stone cylinders, a large, monolithic statue of a humanoid head, and the decapitated corpse of a large alien, thought to be an Engineer; Shaw recovers its head. Other bodies are found, leading the crew to surmise that the species is extinct. Crew members Millburn and Fifield grow uncomfortable with the true nature of the mission and attempt to return to Prometheus, but are left stranded in the structure when they get lost. The expedition is cut short when a rapidly approaching storm forces the crew to return to the ship. David secretly takes a cylinder from the structure, while the remaining ones begin leaking a dark liquid. Back in the ship's lab, the Engineer's DNA is found to match that of humans. David investigates the cylinder and the dark liquid inside. He intentionally taints a drink with the liquid and gives it to an unsuspecting Holloway after he states that he would do anything for answers. Shortly after, Shaw and Holloway have sex.
Inside the structure, a snakelike creature kills Millburn, and sprays a corrosive fluid that melts Fifield's helmet. Fifield falls face-first into a puddle of dark liquid. When the crew return, they find Millburn's corpse. David separately discovers a control room containing a surviving Engineer in stasis, and a star map highlighting Earth. Meanwhile, Holloway sickens rapidly. He is rushed back to Prometheus, but Vickers refuses to let him aboard, and at his urging, burns him to death with a flamethrower. Later, a medical scan reveals that Shaw, despite being sterile, is pregnant. Fearing the worst, she uses an automated surgery table to extract a squid-like creature from her abdomen. Shaw then discovers that Weyland has been in stasis aboard Prometheus. He explains that he wants to ask the Engineers to prevent his death from old age. As Weyland prepares to leave for the structure, Vickers addresses him as "Father".
A monstrous, mutated Fifield attacks the Prometheus's hangar bay and kills several crew members before he is killed. The Prometheus's captain, Janek, speculates that the structure was an Engineer military installation that lost control of a virulent biological weapon, the dark liquid. He also determines that the structure houses a spacecraft. Weyland and a team return to the structure, accompanied by Shaw. David wakes the Engineer from stasis and speaks to him in an attempt to explain what Weyland wants. The Engineer responds by decapitating David and killing Weyland and his team, before reactivating the spacecraft. Shaw flees and warns Janek that the Engineer is planning to release the liquid on Earth, convincing him to stop the spacecraft. Janek ejects the lifeboat and rams Prometheus into the alien craft, sacrificing himself and two willing members of the crew. Vickers flees in an escape pod. The Engineer's disabled spacecraft crashes onto the ground; its wreckage crushes Vickers. Shaw goes to the lifeboat and finds her alien offspring is alive and has grown to gigantic size. David's still-active head warns Shaw that the Engineer has survived. The Engineer forces open the lifeboat's airlock and attacks Shaw, who releases her alien offspring onto the Engineer; it thrusts an ovipositor down the Engineer's throat, subduing him. Shaw recovers David's remains, and with his help, launches another Engineer spacecraft. She intends to reach the Engineers' homeworld in an attempt to understand why they wanted to destroy humanity.
In the lifeboat, an alien creature bursts out of the Engineer's chest.