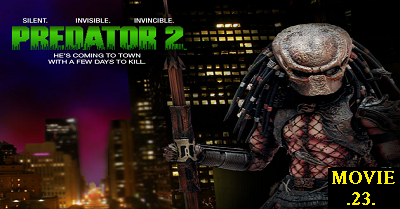 In 1997, Los Angeles is suffering from both a heat wave and a turf war between heavily-armed Colombian and Jamaican drug cartels. A Predator (Kevin Peter Hall) watches a shootout between the police and Colombians, observing as Lieutenant Michael Harrigan (Danny Glover) charges into the firefight to rescue two wounded officers and drive the Colombians back into their hideout. While the police are ordered to wait for a federal task force to arrive on the scene, the Predator crashes through a skylight and attacks the Colombians. Harrigan and his detectives Leona Cantrell (María Conchita Alonso) and Danny Archuleta (Rubén Blades) enter against orders and find the Colombians have been slaughtered. Harrigan pursues the gang leader onto the roof and shoots him, catching a glimpse of the camouflaged Predator's silhouette, but dismissing it as an effect of the heat. Harrigan is rebuked by his superiors for his disobedience. He is also introduced to Special Agent Peter Keyes (Gary Busey), leader of the task force who are purportedly investigating the cartels, and Detective Jerry Lambert (Bill Paxton), the newest member of Harrigan's team.
Later that evening, the Predator kills several Jamaican cartel members, while they are ritualistically murdering the Colombian drug lord at his home. Despite being ordered to wait for Keyes, Harrigan and his team enter the penthouse where they find the Jamaicans' skinned corpses suspended from the rafters, noting the similarity to the earlier Colombian massacre. Keyes kicks Harrigan's team out, but Archuleta later returns to continue investigating. He finds one of the Predator's speartip weapons in an air conditioning vent, but is then killed by the Predator. Harrigan vows to bring down Danny's killer, believing they are dealing with an assassin. A forensic scientist finds the speartip does not correspond to any known element in the periodic table. Looking for answers, Harrigan meets with Jamaican drug lord King Willie (Calvin Lockhart), a voodoo practitioner. King Willie tells Harrigan that the killer is supernatural, and that he should prepare himself for battle against him. After Harrigan is escorted away by gang members, the Predator kills King Willie, the latter's head made into a trophy.
Cantrell and Lambert are intervening in a mugging on the subway when the Predator attacks them. Cantrell herds the passengers to safety while Lambert faces off against the Predator and is killed. The Predator is about to kill Cantrell as well, but releases her when his thermal vision reveals that she is pregnant. Arriving on the scene, Harrigan chases the Predator but is stopped by Keyes, who reveals that the killer is an extraterrestrial hunter with infrared vision that uses active camouflage and has been hunting humans for sport, referring to previous events in Central American jungle. Keyes and his team have set a trap in a nearby slaughterhouse, using thermally insulated suits and cryogenic weapons in an attempt to capture him for study. However, the Predator sees through the trap by using his mask to scan through various electromagnetic wavelengths and kills the team. Harrigan intervenes, shooting the Predator several times and removing his mask.
Still alive, the Predator kills Keyes using a throwing disc and escapes to the roof. Harrigan knocks him over the side and finds himself on a narrow ledge with the Predator hanging below. The Predator attempts to activate the self-destruct device on his forearm, but Harrigan captures the throwing disc and uses it to sever his forearm and destroy the device. The Predator falls through an apartment window and uses a medical kit to treat his wounds, then flees through the building. Harrigan follows him down an elevator shaft and finds a spacecraft in an underground chamber. Inside the ship, the two face off in a final duel, with Harrigan finally killing the Predator by impaling him with the throwing disc. A number of other Predators appear, collecting their dead comrade and presenting Harrigan with an antique flintlock pistol labeled "Raphael Adolini 1715". Harrigan escapes the ship as it takes off and reaches the surface just as the remainder of Keyes' team arrives, furious that they were unable to capture the alien. Harrigan knows that the creatures have been on Earth before, and suspects they will soon return.