Perfume: The Story of a Murderer (2006 English Film) 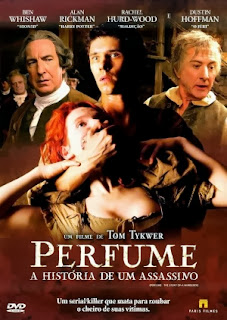 The film begins with the sentencing of Jean-Baptiste Grenouille (Ben Whishaw), a notorious murderer. Between the reading of the sentence and the execution, the story of his life is told in flashback, beginning with his abandonment at birth in a French fish market. Raised in an orphanage, Grenouille grows into a strangely detached boy with a superhuman sense of smell. After growing to maturity as a tanner's apprentice, he makes his first delivery to Paris, where he revels in the new odors. He focuses on a redheaded girl selling plums (Karoline Herfurth), following her and repeatedly attempting to sniff her, but startles her with his behavior. To prevent her from crying out, he covers the girl's mouth and unintentionally suffocates her. After realizing that she is dead, he strips her body naked and smells her all over, becoming distraught when her scent fades. Afterwards, Grenouille is haunted by the desire to recreate the girl's aroma.
After making a delivery to a perfume shop, Grenouille amazes the Italian owner, Giuseppe Baldini (Dustin Hoffman), with his ability to identify and create fragrances. He revitalizes the perfumer's career with new formulas, demanding only that Baldini teach him how to preserve scents. Baldini explains that all perfumes are harmonies of twelve individual scents, and may contain a theoretical thirteenth scent. Grenouille continues working for Baldini but is saddened when he learns that Baldini's method of distillation will not capture the scents of all objects. Baldini informs Grenouille of another method that can be learned in Grasse and agrees to help him by providing the journeyman papers he requires in exchange for 100 new perfume formulas. En route to Grasse, Grenouille discovers that he has no body odor, and is therefore worthless. He decides that creating the perfect perfume will prove his worth.
Upon arrival in Grasse, Grenouille catches the scent of Laura Richis (Rachel Hurd-Wood), the beautiful, redheaded daughter of the wealthy Antoine Richis (Alan Rickman) and decides that she will be his "thirteenth scent", the linchpin of his perfume. Grenouille finds a job in Grasse under Madame Arnulfi (Corinna Harfouch) and learns the method of enfleurage. He kills a young lavender picker and attempts to extract her scent using the method of hot enfleurage, which fails. After this, he attempts the method of cold enfleurage on a prostitute he hired, but she becomes alarmed and tries to throw him out. He murders her and successfully preserves the scent of the woman. Grenouille embarks on a killing spree, targeting beautiful young women and capturing their scents using his perfected method. He dumps the women's naked corpses around the city, creating panic. After preserving the first twelve scents, Grenouille plans his attack on Laura. During a church sermon excommunicating him, it is announced that a man has confessed to the murders. Richis remains unconvinced and flees the city with his daughter. Grenouille tracks her scent to a roadside inn and sneaks into her room that night, murdering her.
Soldiers capture Grenouille moments after he finishes preparing his perfume. On the day of his execution, he applies the perfume on himself, forcing the jailers to release him. The executioner and the crowd in attendance are speechless at the beauty of the perfume; they declare Grenouille innocent before falling into a massive orgy. Richis, still convinced of Grenouille's guilt, threatens him with his sword, before being overwhelmed by the scent and embraces Grenouille as his "son". Walking out of Grasse unscathed, Grenouille has enough perfume to rule the world, but has discovered that it will not allow him to love or be loved like a normal person. Disenchanted by his aimless quest, he returns to the Parisian fish market where he was born and pours the remaining perfume over his head. Overcome by the scent and in the belief that Grenouille is an angel, the nearby crowd devours him. The next morning, all that is left are his clothes and the empty bottle, from which one final drop of perfume falls.

Thanks for watching Perfume: The Story of a Murderer (2006 English Film) Full Movie