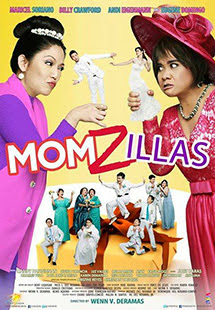 Momzillas is a 2013 Filipino comedy film directed by Wenn V. Deramas and produced by Star Cinema and Viva Films. It stars Maricel Soriano, Eugene Domingo, Billy Crawford, and Andi Eigenmann and is part of Star Cinema's 20th Anniversary presentation.
Two moms are drawn into direct conflict when their children announce their intentions to get married. The mothers have to put aside their differences, however, when they are both marooned on a distant island.