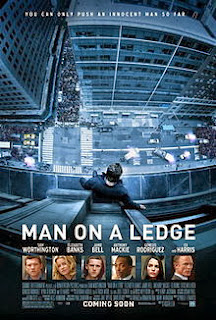 In New York City, Nick Cassidy (Sam Worthington) checks in to the Roosevelt Hotel under the false name of Walker, goes to his hotel room on the 21st floor, and climbs on the ledge, apparently ready to commit suicide. The crowd below calls the police, with Dante Marcus (Titus Welliver) controlling the crowd, while Jack Dougherty (Edward Burns) tries to talk with Nick. However, Nick will only speak to negotiator Lydia Mercer (Elizabeth Banks), who is on a leave of absence, after failing to save a suicidal policeman. Lydia arrives at the hotel room and manages to acquire Nick's fingerprints from a cigarette they share. Dougherty has them analyzed and discovers that Nick is an ex-policeman, arrested for stealing the $40 million Monarch diamond from businessman David Englander (Ed Harris). Nick was given a 25-year sentence but escaped from the Sing Sing Correctional Facility one month earlier, after being allowed to attend his father's funeral. Nick, however, maintains his innocence and accuses Englander of framing him for the theft of the diamond, as Englander lost his fortune and was too proud to sell the diamond.
Unknown to the police, Nick is merely distracting them while his brother, Joey (Jamie Bell), and Joey's girlfriend, Angie (Génesis Rodríguez), break into Englander's vault across the street, to steal the diamond and prove Nick's innocence. Meanwhile, Dougherty informs Marcus of Nick's identity, and Marcus orders the jewelry store's security to check the vault. Joey and Angie are able to evade them but don't find the diamond. They set off the alarms, tricking Englander into retrieving the diamond and ambush him, stealing the diamond at gunpoint. Meanwhile, Nick's ex-partner, Mike Ackerman (Anthony Mackie), arrives at the hotel with evidence that Nick is planning something and demands to be allowed into the hotel room. Lydia does not trust him, and Dougherty backs her up. Ackerman claims he has found bomb schematics in Nick's prison cell and is convinced that he will detonate an explosive somewhere. While the crowd is evacuated by the bomb squad, Lydia, believing in Nick's innocence, calls Internal Affairs and discovers that three of the cops employed by Englander were suspected of being corrupt: Ackerman, Marcus and a deceased officer called Walker.
Englander calls Marcus, one of the men who helped him frame Nick, and has him capture Joey and Angie, but they have already given the diamond to a hotel concierge. Marcus chases Nick to the roof, where he has Lydia arrested for obstruction. Englander brings Joey and Angie, threatening to throw Joey off the roof, if Nick does not give him the diamond. Nick turns it over, and Englander leaves. Meanwhile, Lydia escapes custody and rushes back to the roof. Marcus attempts to force Nick to jump off the roof, but Ackerman arrives and shoots Marcus, who wounds Ackerman. Nick rushes to Ackerman's side, and Ackerman apologizes for his part in the setup. Marcus survives, as he is wearing a bulletproof vest, and is preparing to kill Nick, when Lydia shoots him, but does not kill him. Nick jumps from the roof onto an airbag set up earlier by the police, catches up to Englander, and pulls the diamond he had only just recently given him. Englander is arrested, while Nick is pardoned by the governor. Later, he meets Joey, Angie, and Lydia at a bar, where he reveals the hotel concierge to be his father, who had faked his own death. Joey proposes to Angie with a diamond ring presumably stolen from Englander's vault, and they all celebrate together.