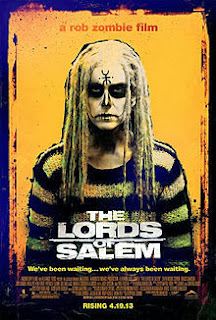 In Salem, Massachusetts, Heidi (Sheri Moon Zombie), a recovering drug addict, works as a DJ at a hard rock station with her co-workers Whitey (Jeff Daniel Phillips) and Herman (Ken Foree). She receives a strange wooden box containing an album by a band named the Lords of Salem. At her home, she and Whitey listen to the record which is of a woman's voice reciting a mysterious chant. Heidi has a vision of witches birthing a baby then damning it. The vision stops once Whitey turns the album off.
The next day, Heidi interviews Francis Matthias (Bruce Davison), who has written a book about the Salem witch trials. The station then plays the Lords of Salem record, which causes all of the women in Salem (other than Heidi) to enter a trance. After the show is over, Matthias tells his wife that the band's name, The Lords of Salem, bothers him. That night, Heidi's landlord, Lacy (Judy Geeson) insists that Heidi split a bottle of wine with her and her sisters, Sonny (Dee Wallace) and Megan (Patricia Quinn). Megan, a palm reader, tells Heidi that she is fated to succumb to her dark sexual desires: "the only reason you exist." Disturbed, Heidi leaves the party. Later, Heidi notices her dog is acting strangely. She enters the supposedly vacant Apartment 5 and experience visions of a demon and a nude witch that demands that she lead the coven again. Heidi wakes up in bed and assumes the events in Apartment 5 were a vivid nightmare.
Troubled, Heidi visits a graveyard church where she is sexually assaulted by a priest. She then wakes up in one of the pews, with the assault seemingly another dream. Heidi flees the church but is faced with a ghostly entity who tells her that he has been waiting for her. Meanwhile Matthias researches the Lords of Salem. He discovers some music in a book he is reading and, after asking his wife to play the notes on their piano, realizes that it is the same music heard on the record. Matthias tracks down the author, who tells him that in the seventeenth century one Reverend Hawthorne (Andrew Prine) accused a coven of witches of creating the music to control the women of Salem. As a result Hawthorne killed the witches, but not before one of them, Margaret Morgan (Meg Foster)—the witch Heidi encountered outside Apartment 5—cursed both the Salem women and Hawthorne's descendants, calling his bloodline "the vessel by which the devil's child would inherit the earth." Further research demonstrates that Heidi is a descendant of Reverend Hawthorne.
Heidi's radio station announces they will be giving away tickets to the upcoming Lords of Salem concert. The record is played once again, which causes Heidi to have more strange visions that upset her. Upset, she spends the night at Whitey's home, but experiences more disturbing visions before waking up in her own apartment. Heidi begins smoking heroin again. While she is stoned, Lacy, Sonny and Megan take her to Apartment 5. Instead of an apartment it is a huge opera house with the demon at the top of a staircase. She approaches him as he screams, but later finds her way back to her bedroom.
The next day, Matthias tries to tell Heidi the truth about the Lords of Salem and her lineage. Instead, Lacy and her sisters kill him. Heidi hears his murder, but does nothing. At the concert, Heidi joins Lacy, Sonny, Megan and the ghosts of Margaret and her coven in a satanic ritual. The Lords' music causes the female audience members to strip off their clothes. In the midst of surreal visions, Heidi blissfully gives birth to a strange creature atop the corpses of the naked audience members. The next day, Heidi's station reports on a mass suicide at a rock concert, as well on the disappearance of Heidi.

Thanks for watching Lords Of Salem (2012 English Film) Full Movie