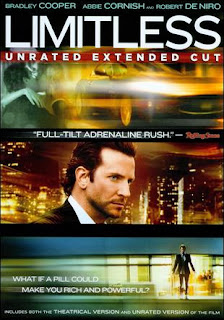 Eddie Morra (Bradley Cooper) an author suffering from writer's block, living in New York, is stressed by the approaching deadline his publisher has set. His girlfriend Lindy (Abbie Cornish), frustrated with his lack of progress and financial dependence, breaks up with him. Later, Eddie meets Vernon Gant (Johnny Whitworth), his ex-brother in law. Vernon gives Eddie a nootropic drug, NZT-48. After taking the pill, Eddie finds himself able to learn faster and recall memories from his distant past. He uses this ability to finish ninety pages of his book. The next day, the effects having worn off, he seeks out Vernon in an attempt to get more. While Eddie is running an errand, Vernon is killed. Eddie returns, steals Vernon's NZT supply and calls the police. Using NZT to his benefit, Eddie completes his book. Testing his potential on the stock market, Eddie manages to make large returns on small investments. Realizing he requires more capital, he borrows one hundred thousand dollars from a Russian loan shark, Gennady (Andrew Howard), and successfully makes a return of two million dollars. He increases his NZT dosage, and rekindles his relationship with Lindy.
Eddie's success leads to a meeting with a business tycoon, Carl Van Loon (Robert De Niro), who wants Eddie to advise him on a merger with Hank Atwood (Richard Bekins). To celebrate, Eddie spends the evening in a bar, and ends up in a hotel room with a blonde woman (Caroline Winberg). However, he experiences memory loss, forgetting everything he'd done in the last eighteen hours, and finds himself standing on a bridge. Later, Eddie sees a news report detailing the murder of the woman he has spent the night with, and is unable to remember if he was the killer.
Eddie meets with his ex-wife Melissa, and discovers that she too had been on NZT. When she attempted to stop taking it, she had experienced extreme side effects and others had died after stopping. On his way home, Eddie is attacked by Gennady, who takes Eddie's last NZT pill. Eddie visits Lindy and asks her to retrieve his backup stash, which he had hidden in her apartment. On her way back, she is followed by a man (Tomas Arana) who'd been stalking Eddie. He traps Lindy, and Eddie tells her to take an NZT pill. She uses the enhanced processing powers it gives her to escape and returns the pills to Eddie.
Eddie experiments with the drug, and learns to control his dosage and food intake to stop any side effects developing. He continues to earn money on the stock exchange, and hires bodyguards to protect him from Gennady, who threatens him in an attempt to locate more NZT. He buys an armored penthouse, and hires a laboratory to reverse engineer NZT. For his part in the merger, Eddie is promised forty million dollars, and he hires an attorney (Ned Eisenberg) to help keep the police, investigating both Vernon and the woman's deaths, away.
On the day of the merger, Atwood's wife informs Van Loon that he has fallen into a coma. Eddie recognises Atwood's driver as his stalker. While Eddie participates in a lineup, his attorney steals Eddie's whole supply of NZT from his jacket. Eddie discovers his pills are gone when he returns home, and enters withdrawal. Gennady breaks into his apartment, demanding more NZT. He reveals that, to increase its potency, he has been injecting it. Eddie stabs Gennady, and drinks his blood to absorb the intravenous NZT. His increased mental capacity reinstated, Eddie kills Gennady's henchmen and escapes. He meets with his stalker, surmising that Atwood employed the man to locate more NZT. The two join forces and recover Eddie's stash from his attorney (who didn't pass the NZT to his client).
A year later, Eddie has retained his wealth, his book has been released, and he is running for the United States Senate. Van Loon visits him and reveals he has absorbed the company that produced NZT and shut down Eddie's laboratory. He offers a steady supply of the drug in return for power when Eddie inevitably becomes president. Eddie reveals that not only did he have multiple laboratories producing NZT for him, but that they had eventually developed a way for him to stop taking the drug and retain his mental abilities. He dismisses Van Loon, and meets Lindy at a Chinese restaurant for lunch. He speaks to the waiter in perfect Chinese, however, and Lindy's expression suggests that his claim to be off of NZT may not at all be the case.